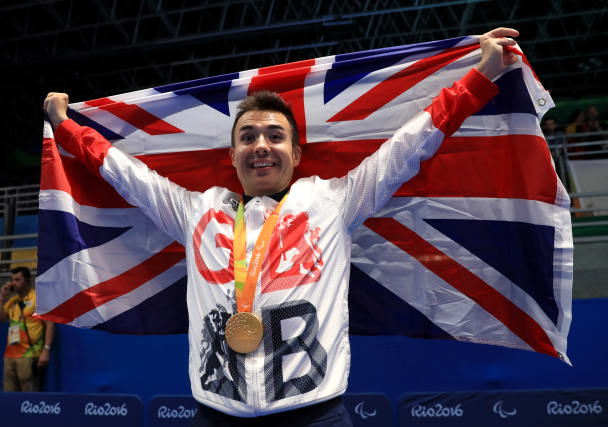 Will Bayley has no regrets over the Strictly adventure which left him facing a desperate battle to defend his Paralympic table tennis title in Tokyo – and has vowed to evoke the example of Tyson Fury and return stronger than ever.

The 32-year-old, who was forced to withdraw from the BBC programme in week seven last October after sustaining a knee injury jumping from a stage in rehearsals, will resume full training at the GB para table tennis centre in Sheffield this month.

Bayley told the PA media agency: “I loved every second of my time on Strictly. In hindsight I probably would have done things a bit differently, but I was having the time of my life. I have no regrets about Strictly at all.”

Despite undergoing surgery which has left him with a tight time-frame to make a full recovery, Bayley  is adamant not only that he will beat the count, but that the skills he learned in his six-week stint on the programme will make him a better player.

Bayley, who was born with a condition called arthrogryposis, which affects all four of his limbs, added: “It was nice to try something new to try and improve my balance and co-ordination.

“Paralympic sport is getting more and more competitive, so it shows I have to keep improving and developing. I thought dance would help me with that and I think it will really pay off.

“My balance and learning to transfer my weight – I had to do a lot of that in Strictly, and I think it is coming a bit more naturally to me. Being able to flow from foot to foot has really helped me.”

Having started playing table tennis during his recovery from cancer when he was seven, Bayley is unsurprisingly bullish about his chances of overcoming his latest challenge and repeating his emotional gold medal success in Rio.

An avid boxing fan, Bayley said he has been inspired by Tyson Fury’s recent triumph over Deontay Wilder with the British heavyweight having battled depression and shed over 10 stone to get back into fighting shape.

“When you see someone come back from the kind of downward spiral he was on, to becoming heavyweight champion of the world, then I can come back from this and win a gold medal,” added Bayley.

“If he can beat one of the most dangerous punchers maybe in the history of world boxing, it gives me massive belief. Your mindset is so important, and he is such an inspiration.”

Bayley’s decision to appear on Strictly – and accept its consequences – stems from a deeper acceptance that he has emerged as a role model for thousands of children facing similar conditions.

Even future gold medals, and the prospect of a repeat of his famous celebration in 2016, when he clambered onto the table to celebrate victory, are very much secondary to his broader desire to inspire others to take up sport.

“I did it because I wanted to inspire people,” added Bayley. “I never thought someone with my condition would be able to do Strictly, and that was the reason I wanted to do it.

“When I was seven or eight years old I never really had anyone with my disability doing something like that. So I thought, why can’t I be that person?

“It would be a bit hypocritical if I didn’t do it, so I thought, bring it on, it’s going to be a great audience, 12 million people watching every week. I thought, I’ll have some of that.

“Trying to move the sport forward is what it’s all about for me. I’ve won the European Championships, the World Championships and the Olympics – now if I can transcend the sport, that is my next goal.”

Bayley, who is already virtually assured of Tokyo qualification, is scheduled to step up his comeback later this month and his team say they are “confident” he will be fully fit for Tokyo.

He dreams of opening a series of table tennis centres and while he has not ruled out a future return to Strictly were he to be asked, Bayley already has his sights on another reality TV adventure.

“I couldn’t dance, but I can’t really go wrong with ‘I’m a Celebrity’, because all I’ve got to do is the trials, and I won’t back down from any trials, so that would be fine.”