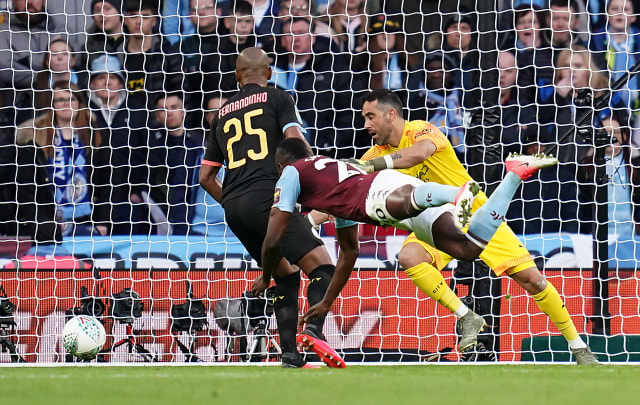 The striker scored as Villa lost 2-1 to Manchester City in Sunday’s final at Wembley.

Defeat came after Villa slipped to second from bottom in the Premier League, two points from safety, after several rivals picked up points over the weekend.

Dean Smith’s side travel to Leicester on Monday aiming to get their survival bid back on track after three straight top-flight defeats and Samatta is confident they have put Sunday’s disappointment to the back of their minds.

“The game is finished already,” said the Tanzania international. “It’s the past, we didn’t win the cup. Now we’re focusing on the next game.

“We saw the other results but we only focus on our games. We have to focus on getting as many points as possible.

“Everyone is confident and everybody has positive energy. I’m sure we’ll stay up. We will work on it.

“As a team we always want to win games. We are trying to do that and it’s just a matter of time until we catch the pace and we’re going to start winning games.

“City have a good team with top players and they dominated the game. They like to have possession but we knew we would still have chances.

“We scored one goal and knew we could still get another one. The character is there and everybody is believing. There is just something missing but we are going to have it.

“It was not a bad performance from us and if we continue to keep working hard, we have a chance. The chance is still there.”

Sergio Aguero and Rodri put City 2-0 up before Samatta’s 41st-minute header. He became the first Tanzanian player to score at Wembley but the 27-year-old had mixed emotions.

“I just wanted to win the cup, better than scoring is winning the cup,” said the forward, who has netted twice since his £8.5million January move from Genk.

“But as a striker it always gives you confidence when you score goals. I’m still making progress, I’m not there yet but I’m going the right way.”