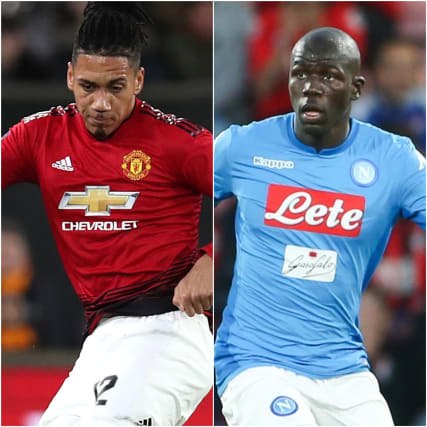 England and Manchester United defender Chris Smalling could be set for a reunion with Jose Mourinho at Tottenham. The Daily Mail says Mourinho is eager to make a summer bid for the 30-year-old following an impressive stint on loan with Roma. Smalling is yet to agree to a permanent move to the Serie A side and has history with Mourinho, having played under him for three years at Old Trafford.

Staying with United, the Daily Express reports that the Red Devils are currently leading the race for Napoli defender Kalidou Koulibaly. Real Madrid, Paris St Germain, Manchester City and Barcelona are also believed to be interested in snapping up the Senegal international in the summer.

Someone who could potentially join Koulibaly at the back for United is Stoke’s Nathan Collins. According to The Sun, the club have one of their scouts keeping a close eye on the 18-year-old.

Despite Chelsea’s best efforts, it appears that key target Dries Mertens is close to inking a new deal with Napoli. The Sun reports that the Belgium forward, whose contract is up in the summer, may prefer to stay in Italy after becoming the club’s joint all-time top scorer last week.

Mikel Arteta is eyeing Atletico Madrid defensive midfielder Thomas Partey as his first big signing, according to The Sun. The Arsenal boss reportedly views the Ghana international as an ideal fit to add some much-needed strength to his squad.

Alexander Sorloth: The 24-year-old Crystal Palace striker – on loan at Trabzonspor – is on the radar of Sheffield United, Aston Villa and Newcastle, according to HITC.

Arnaud Lusamba: The French youth international is on the verge of joining Leicester from Nice, the Daily Mail reports.