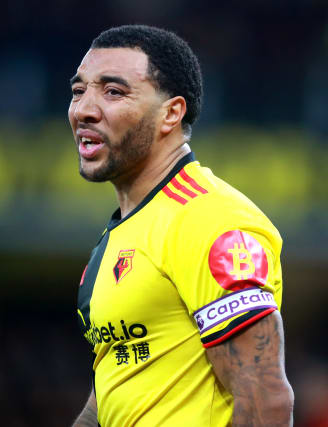 A brace from Ismaila Sarr, who then set up Deeney for the final goal of a 3-0 Watford win, saw champions-in-waiting Liverpool beaten in the league for the first time since January 2019.

Watford were great value for their convincing victory, limiting Liverpool – unbeaten in 44 games heading to Vicarage Road – to just one shot on target.

A run of five winless games had Nigel Pearson’s side on the ropes in their quest for top-flight survival but they moved out of the relegation zone on goal difference following the shock result.

Deeney said the Watford players had taken a leaf out of Fury’s book when deciding to attack Liverpool, the British boxer having beaten Deontay Wilder for the WBC world heavyweight title in Las Vegas the previous weekend.

“We thought we’re going to go on the front foot and have it out with them. We were good and they were a little bit off.

“Let’s not act like they were at their best. We took our chances and I don’t know what more to say. I don’t want to be disrespectful to them.”

Contrary to what many would have expected, Deeney also claimed preparations for the Liverpool game had been relaxed.

“Do you want to know the God’s honest truth? This week was the least we’ve done,” he said.

“We had a yoga day on Thursday. We came away from the training ground and went to Nuffield for a yoga and swimming day because the gaffer wanted to clear our minds.

“Everyone was putting too much pressure on this. That’s testament to the manager, man-managing and not getting caught up in the hype over ‘We have to win this game’.

“So we had our least demanding week in months. I don’t think that’s going to be something the gaffer does going forward, but we go again.”

The 31-year-old hit his sixth goal of the season after Trent Alexander-Arnold had gifted possession to Sarr but admitted ending Liverpool’s run will count for nothing if they fail to survive in the Premier League.

“We don’t get an extra point for beating Liverpool or (look at it as though) now we’re out of the bottom three, that’s it, we’re done.”

“There’s 10 games and we’ve got to graft away. It is what it is. I won’t look at this game in two months’ time if we’re relegated and go, ‘Oh, remember that game against Liverpool’. I’ll be p***ed off.”

Midfielder Abdoulaye Doucoure echoed Deeney’s sentiment and said Pearson is the type of manager who will keep his players grounded in demanding a similar performance at Crystal Palace next week.

“The next thing is to win at Palace, you need to stay up in the Premier League so we need to work hard and keep the faith. Like (on Saturday) we need to give everything, to not give up on the possibility of the results coming.

“Nigel is a great guy, he is always about feet on the floor, he never overreacted and you have to stay focused. Of course Saturday was a great day for us and we need to enjoy, but not too much – we need to focus on next week.”