These Manchester City players have something special – Guardiola 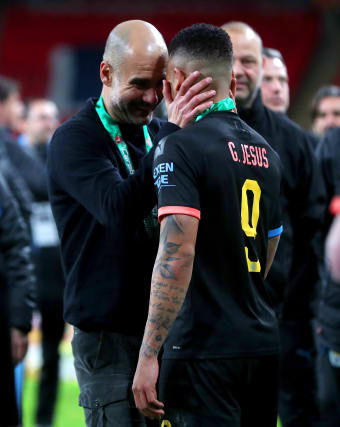 Pep Guardiola hailed his Manchester City players as “something special” after winning the Carabao Cup for a third year in succession.

City held on to beat Aston Villa 2-1 at Wembley after first-half goals from Sergio Aguero and Rodri.

Under Guardiola, City have won eight of the last 11 competitions they have competed in, including two Community Shields.

The City boss said: “That’s a lot. This club is not just about one title, it’s making every game and every title we play in count. We try to win.

“That’s the best thing we can give for our club. Sometimes you win a title and then you don’t win the next for a long time.

“But everyone knows we have the responsibility to fight and try to win titles and games.

“There is no time to rest or celebrate. But I think when we remember what he have done, it is because these players have something special.”

City dominated the opening period but a reply from Mbwana Samatta changed the complexion of the game.

The second-half was a tighter affair and Claudio Bravo produced a brilliant save, tipping a Bjorn Engels header onto the post, to prevent extra time.

Guardiola said: “Credit to Villa. They had chances.

“But I’m very pleased with our performance, especially in the second half. Sometimes you don’t know what to do – attack or keep the result from the first half. We did it properly.

“We created a lot of chances and shots on goal but unfortunately couldn’t score the third one. The game was open but that is normal. It was a final and a lot of energy was spent in Madrid.

“We played really well in general and we have another trophy in our club.”

Phil Foden, who set up the first goal, was named man of the match. It was the 19-year-old’s first appearance for a month.

Guardiola said: “Unfortunately for him he fights against one of the best players in the world in his position but in training he’s incredible and always ready. We can count on him.

“The game he played, the media decided he was man of the match, so congratulations.”

Bravo continues to have his critics after a difficult first season at City in 2016-17 but he has remained loyal to the club as second choice since.

Guardiola said: “He’s one of the most incredible pros I’ve ever seen. I have never doubted his quality as a keeper.”

Guardiola continues to enjoy success at Wembley, where he also won two Champions League finals with Barcelona, as well as last season’s FA Cup with City.

“I love the old Wembley and new Wembley you can invite me whenever you want!” said Guardiola, also a player in Barcelona’s 1992 Champions League triumph.

However, he was not so keen on the idea he should have a Wembley tattoo.