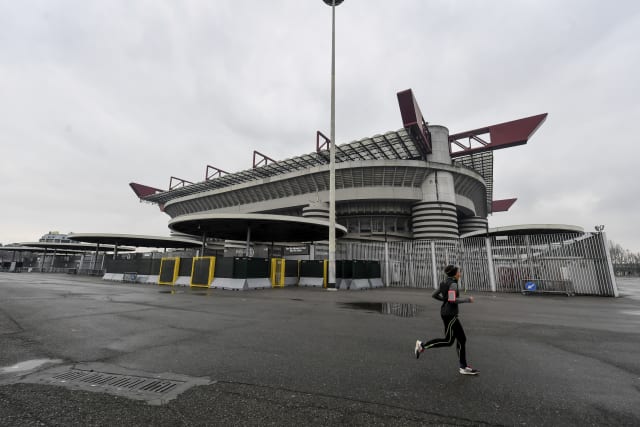 A sixth Serie A match in this week’s round of fixtures has been called off because of coronavirus, with the league calling an emergency assembly to discuss the impact the postponements are having on the fixture list.

Monday’s match between Sampdoria and Hellas Verona in Genoa has been postponed and will now be played on May 13, Lega Serie A announced on Sunday evening.

It comes after five games, including Juventus’ meeting with Inter Milan, were called off on Saturday. They had been due to be played behind closed doors.

The governing body has now called an emergency assembly on Wednesday, it said in a statement, to “discuss the calendar in relation to the emergency resulting from COVID-2019”.

Atalanta’s match away to Lecce was one of just two to go ahead in Italy’s top flight on Sunday and visiting fans, whose club is from Bergamo in the north of the country, were checked for symptoms as they entered the Stadio Via del Mare before the game.

The opening race of the MotoGP season, the Grand Prix of Qatar, has been cancelled due to travel restrictions imposed to limit the spread of coronavirus.

That would impact several teams and riders and led organisers to cancel practice, qualifying and the race itself for the MotoGP class, which were scheduled to take place from March 6-8.

A statement on the official MotoGP website read: “Italy clearly plays a vital role in the Championship and in the MotoGP class – both on track and off – and therefore the decision has been taken to cancel premier class competition.

“As the teams and riders of the Moto2 and Moto3 classes were already in Qatar for the three-day official test at Losail International Circuit earlier this week, the races of both categories will be possible.

“The lightweight and intermediate classes will therefore compete in their season opener from the 6th to 8th March. The same will apply to the Idemitsu Asia Talent Cup, which will have two races during the Qatar Grand Prix as originally planned.”

In golf, the Commercial Bank Qatar Masters, which gets under way on Thursday in Doha, is due to go ahead as scheduled, though.

A spokesperson for the European Tour said: “The preparations for each European Tour event are continuing as planned, enhanced by detailed risk assessment and planning re COVID-19, and that includes this week’s Commercial Bank Qatar Masters.

“The European Tour will continue to work with the World Health Organisation, each national government and their public health teams and our own medical experts to ensure we have the latest health and safety and travel advice.

“As with all our tournaments, the well-being of players, spectators, staff and everyone involved with our tournaments remains our absolute priority.”

In cycling, four-time Tour de France winner Chris Froome and Team Ineos were among those who were allowed to leave their hotel and travel home from the cancelled UAE Tour, but others remained in quarantine in Abu Dhabi following a coronavirus scare.

The final two stages of the UAE Tour, due to take place on Friday and Saturday, were cancelled on Thursday night.

Organisers announced at the time that was due to two confirmed positive tests for the virus among race staff, though cycling’s world governing body later said they were “suspected” cases and it emerged on Saturday both individuals first feared to have the disease had tested negative.