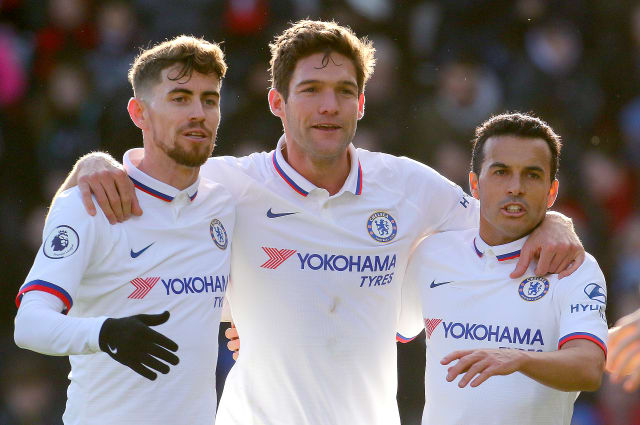 Frank Lampard has told Chelsea’s fringe players to follow Marcos Alonso’s example on how to fight back in from the cold at Stamford Bridge.

Spain left-back Alonso fell out of favour when taken off at half-time as Chelsea scrambled a 4-4 Champions League draw at home to Ajax in November.

The 29-year-old has only played five times since, but now boasts three goals in his last two Premier League matches.

Alonso drilled a fine winner in the 2-1 victory over Tottenham at Stamford Bridge and then pounced twice to snatch the Blues a patchy 2-2 draw at Bournemouth on Saturday.

And now Lampard has praised the former Real Madrid and Fiorentina man for his dogged pursuit of a route back into his plans.

“I’m really pleased with Marcos; he has always had that since he has been at Chelsea, a great record of scoring goals,” said Lampard.

“It was a great technique for the first one and great anticipation for the second one. He nearly even had a third, as he was in the box there at the end.

“I am really pleased with that and I can’t ask for any more than when a player doesn’t play always regularly, that they are professional and train well. They keep their head down and play well, perform like that. I think he is a great example to the younger players on how he has handled that.”

Alonso and Reece James are afforded plenty of attacking scope when Chelsea play 3-5-2, a system that allows for captain Cesar Azpilicueta to function in a back trio.

Lampard admitted his selections are always coloured by his tactical choice.

Asked if he regrets not playing Alonso more given his recent resurgence, Lampard replied: “No. It is an easy-with-hindsight question.

“Marcos played some games early in the season. We have had the emergence of Reece James, who has been very, very good for us this season and I have to find a balance.

“Sometimes it affects the system of the play. There are different reasons why I have to pick the team. So, no. Not regrets. I am always trying to get the best out of each game. I am pleased with how Alonso has come back in.

“It is a system which has worked well for us quite a few times this season. I have Ollie Giroud up front and it allows people to get inside, nearer him. Second balls and link-ups.

“It gives us stability with the three centre-backs and when you move the ball well you can control games.

“We did manage to control once we settled into the game and livened up. It does help in that way with us. It is a system I like for that.”

Bournemouth dropped into the relegation zone despite a draw sealed by goals from Jefferson Lerma and Josh King.

Defender Nathan Ake has called on the Cherries not to dwell on their plight however, in a bid to secure another term in the top-flight.

“After a result like that the only thing you can do is put it to bed and learn from it,” Ake told Bournemouth’s official website.

“There’s no time for negativity, we’re trying to keep everything positive and we showed that. It’s just about trying to get us over the line.

“We got the point but there were phases in the game when we went too deep instead of staying positive.”