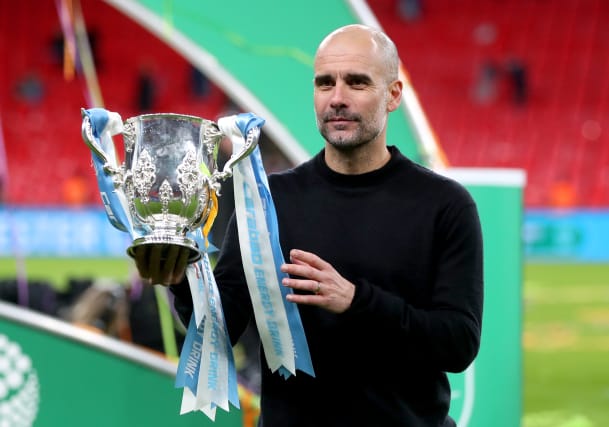 Manchester City manager Guardiola hailed his side after securing a hat-trick of Carabao Cup wins with a 2-1 victory over Aston Villa.

Sergio Aguero and Rodri struck in the first half at Wembley to earn Pep Guardiola his 29th trophy as a manager.

Mbwana Samatta pulled a goal back for Villa but, despite Bjorn Engels hitting a post with two minutes left, a spirited performance could not stop City.

The holders have now lifted the trophy in five of the last seven seasons, with Liverpool the only other team to win it three years in a row, between 1981 and 1984.

Phil Foden, arguably the most surprising inclusion in the City team, revealed he found out on Saturday that he would be involved and the 19-year-old admitted he needs to shine when given such an opportunity.

“The day before, in training,” he replied when asked when he knew he was starting.

“The manager was working on tactics – I couldn’t wait to play. It was an unbelievable day. I have to say fair play to Aston Villa, they gave us a really good game.

“When I play, every minute counts, so I try and do my best and I’m very proud of my performance today.

“You look at players like Kevin De Bruyne and David Silva, who are great, so when I get into the team I have to make the most of it.”