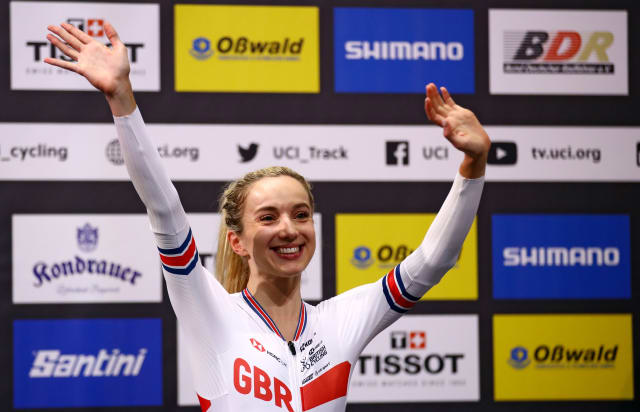 Elinor Barker ensured Great Britain did not leave the UCI Track Cycling World Championships without a rainbow jersey as she took gold in the women’s points race on the final day in Berlin.

It was only a fourth medal for Britain, and their first gold, in a week which has raised questions over expectations for the Tokyo Olympics in five months.

Though the points race is not an Olympic event, Barker’s success was a welcome sign both for the team and her individually.

“It always feels pretty good to be honest,” said the 25-year-old. “It’s not irrelevant that it’s not an Olympic event, but it doesn’t make it feel any less incredible.”

This was a fifth world title for Barker, who also won the points race in Hong Kong in 2017, and came a day after she and partner Neah Evans suffered disappointment in the women’s Madison, seeing their medal hopes dashed by a late crash.

“I’d have much rather won the Madison to be honest, I was very happy with how I rode. I just didn’t end up with a medal and that can happen sometimes in Madison races because it’s so unpredictable, you don’t know what other people’s plans are.

“I knew that I had good legs yesterday so I’m glad that I was able to prove that today.”

Barker and Evans were also part of the women’s team pursuit squad that took silver on Thursday, while there was also silver in the men’s team sprint and bronze for Matt Walls in the men’s omnium.

There were two further chances to add to that tally on Sunday, but Katy Marchant missed out on a place in the women’s keirin final in a photo finish and Ethan Hayter and Ollie Wood could only manage ninth place in the men’s Madison.

The race was won by Danish pair Lasse Norman Hansen and Michael Morkov – bringing the latter a golden end to a week in which he had to spend 34 hours in isolation in his hotel room over coronavirus fears, having arrived from the cancelled UAE Tour.

Morkov said: “Two days ago I was afraid I would not even participate in the event here.

“I have been lucky how the UCI handled the whole situation, examined me and been very helpful in order for me to start this event, so I can’t thank them enough for taking good care of my case.

“It’s hard to describe being world champion here after two days being in the room.”

Wood and Hayter struggled to make an impact, continuing a disappointing week as they were part of a men’s team pursuit squad that could only qualify seventh fastest and saw Denmark break the world record with a time of three minutes 44.672 seconds – almost six seconds quicker than Britain’s best ever time.

“I think we’ve just been a bit off the boil all week,” said Wood. “It’s hard to say why. The stuff leading up to the event was pretty promising in training.”

The gaps to the rest of the world look substantial for Britain’s men’s endurance squad, but Wood was bullish.

“We’re more motivated than ever now,” he said. “It’s only five months and I’m sure it will fly by. We’re keen to get a bit of rest in and then get stuck in. Hopefully by Tokyo we’ll have the recipe and success will follow.”