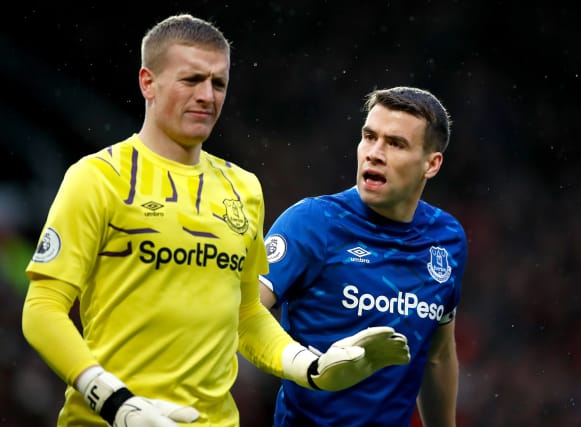 David De Gea’s error for Manchester United was cancelled out by Everton’s Jordan Pickford as goalkeeping mistakes dominated in a disappointing but controversial 1-1 draw at Goodison Park.

Dominic Calvert-Lewin’s 13th league goal of the season after just three minutes came courtesy of a rebounded De Gea clearance while Bruno Fernandes’ superb start to life at Old Trafford was given a helping hand by the England number one.

Neither goalkeeper covered themselves in glory, which was indicative of a match in which January signing Fernandes stood out as the dominant creative force by scoring for the third successive match and being at the heart of his side’s best work.

But even his considerable efforts could not secure back-to-back away league victories for the first time in 13 minutes and had it not been for VAR they would have suffered a controversial added-time defeat.

A seated Gylfi Sigurdsson was ruled to have been offside when Calvert-Lewin’s shot deflected in off Harry Maguire, leading to Everton manager Carlo Ancelotti being shown a red card for his protests to referee Chris Kavanagh after the final whistle.

Extending their unbeaten home record to seven matches will have been little consolation for the Italian, as would a point for United’s Champions League ambitions as they missed the chance to close the gap on fourth-placed Chelsea .

It was 40 years to the day since Dixie Dean died and while Calvert-Lewin can only dream of getting anywhere near the levels of Everton’s goalscoring great he has made a name for himself this season.

The 22-year-old is the club’s most improved player this season and he has flourished since Ancelotti took over with eight league goals in 10 matches, more than anyone else in the top flight since Christmas, putting him in contention for a maiden England call-up.

Gareth Southgate was here to check on him in person and while what he saw was not as spectacular as his goal at Arsenal last week it was showreel of Calvert-Lewin’s stock in trade.

Winning aerial battles, working hard and selflessly running in behind are all major character traits and while he has added goals in this current campaign the third-minute opener was more about De Gea’s misjudgement in delaying long enough for Calvert-Lewin to get in a block the ball into an empty net.

It was the seventh error leading to a goal the Spain international had made since the start of last season: no top-flight goalkeeper has made more.

But if there is one goalkeeper who has been under more scrutiny over the last few months it is Pickford and, after a clean-through Calvert-Lewin had been denied a second by De Gea, the focus shifted to the England number one.

He had already been rescued by the crossbar when beaten by Nemanja Matic’s cross but had nowhere to hide when he allowed Fernandes’ shot to go under him.

Djibril Sidibe, a first-half replacement for the injured Seamus Coleman, had given the ball away to Matic playing out from a goal-kick and when it was quickly moved forward United’s new signing unleashed a low shot which was dipping but should have been saved.

It was Pickford’s second error in successive home appearances but on the previous occasion it did not affect the result and afterwards the goalkeeper came out fighting claiming he got criticism because everyone “hated” England players.

Two similar mistakes within three matches suggests an underlying problem which could give Southgate something to think about when he picks his team for the friendlies against Italy and Denmark later this month.

Four bookings in four minutes before half-time showed how scrappy the game had become with the rare pieces of good football seeing Richarlison miss a diving header, Gylfi Sigurdsson’s free-kick hit a post with De Gea beaten and Fernandes generally dictate all of United’s attacking intent.

His cross with the outside of his right foot having raced clear from halfway was indicative of the confidence level the January signing is operating at – and why United have enjoyed their recent upturn – and it took Leighton Baines at full-speed to prevent it reaching substitute Odion Ighalo.

When Fernandes did find a way through Pickford produced his best with a double save from him and Ighalo, while De Gea and VAR did similarly to stop Sigurdsson and Calvert-Lewin.