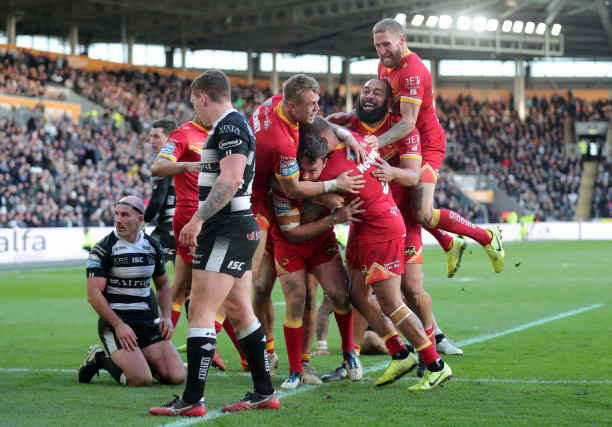 Catalans Dragons snatched a last-gasp 34-29 victory at Hull FC as Israel Folau made his first Super League appearance in England.

The 12-month contract handed to the 30-year-old by the French club was widely condemned by both Super League and the Rugby Football League, who have since tightened up the rules to prevent further controversial additions to the competition.

Folau, who was sacked by Rugby Australia last May for making homophobic comments on social media, made a try-scoring debut for Catalans during their 36-18 home victory against Castleford last month but struggled to make an impact at the KCOM Stadium.

Hull ran in 24 unanswered points either side of the break and looked set to return to winning ways, with Jamie Shaul scoring the pick of the tries as the the hosts moved 28-10 ahead.

Catalans responded with three quickfire second-half tries to level the scores but the hosts thought Marc Sneyd won it with a drop-goal three minutes from time.

However, Folau produced a superb catch to regain possession from a short Catalans kick-off, which resulted in James Maloney crashing over for the match-winning score.

It was an emotional afternoon as Hull paid tribute before kick-off to former player Adam Maher, who died at the age of 47 on Wednesday following a battle with motor neurone disease.

The Black and Whites opened the scoring in the 14th minute when a neat move from left to right saw Mahe Fonua sprint clear and cross in the corner.

Benjamin Jullien celebrated his 25th birthday with a try in the 23rd minute to draw Catalans level but the French team crossed again as Fouad Yaha scored in the corner, with Maloney converting to move them 10-4 ahead.

The hosts were back on level terms in the 33rd minute when Hull worked down the right edge once again, with Fonua crossing the whitewash for the second time.

Hull ensured they led at half-time when the hosts continued to dominate down the right wing, with Carlos Tuimavave, who replaced the injured Jake Connor moments earlier, scoring three minutes before the break for a 16-10 lead.

A knock-on by the Dragons gifted possession and the home side made them pay when Albert Kelly offloaded for Shaul, who sprinted 50 metres before crossing in the corner to make it a two-score lead.

Lee Radford’s team improved their advantage to 28-10 with 52 minutes on the clock when Manu Ma’u produced a wonderful step to slice through the Catalans defence and bulldoze over Sam Tomkins for a try on his home debut.

However, The Dragons hit back after conceding 26 straight points with Jullien brushing past a Hull defender to slide over for his second try, which was quickly followed by Josh Drinkwater’s score under the posts.

Maloney converted both tries to reduce the deficit to six points and the scores were soon level when Samisoni Langi strolled over with 10 minutes remaining.

Sneyd hit a Hull-record 31st drop-goal to seemingly win it for the Black and Whites but Maloney had the last word with a telling late try.