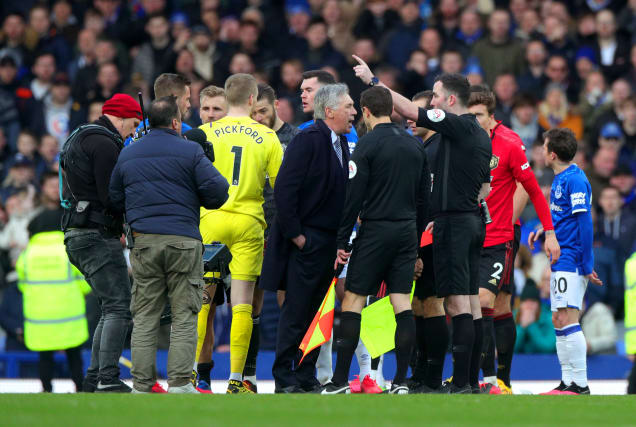 Everton manager Carlo Ancelotti saw red after his side were denied a last-gasp winner against Manchester United due to what Dominic Calvert-Lewin called a “disaster” of a VAR decision.

Sunday’s Premier League encounter ended 1-1 at Goodison Park, where the match ended as manically as it had began.

The England goalkeeper made amends with a superb stop from substitute Odion Ighalo at the death and De Gea pulled off a fine save of his own before Calvert-Lewin sent Goodison Park wild with what appeared to be a stoppage-time winner.

But a seated Gylfi Sigurdsson was ruled offside by video assistant referee Jon Moss when the shot deflected in off Harry Maguire and incandescent Everton boss Ancelotti was given a red card at full-time.

Calvert-Lewin was shown the contentious VAR decision moments before giving Sky Sports his post-match interview, with his immediate reaction being: “That is a disaster. Oh my gosh. He’s not even obstructing the line of sight”.

The 22-year-old gave a more measured response when subsequently interviewed by the broadcaster.

“In the moment, I wasn’t sure,” Calvert-Lewin said. “Seeing it back I think Gylfi on the floor doesn’t obstruct the line of sight.

“Fair enough, he’s in an offside position but then it takes a deflection, the keeper is going the other way and he’s got his legs out of the way. The keeper is never going to save the ball so I’m not sure what it is.

“For me, as a striker, I think it’s a goal, but VAR says otherwise and cancels out the emotion at the end. What can you do?”

The Goodison Park faithful let their feelings known at the stoppage-time decision and Ancelotti marched onto the field after the final whistle to remonstrate.

The Everton manager was shown a red card by referee Chris Kavanagh for his remonstrations, before having a more civil conversation with the official once the emotions had settled.

“I ask for an explanation after the game,” Ancelotti said. “There was a misunderstanding on the pitch, he sent me off and after that I spoke with him in the dressing room calmly.

“I want to keep the conversation private. Now he’s going to do a report to the FA and we will see.

“It can happen but we will see if I am banned or not.

“Honestly, it was a difficult decision. I think they check the position of Gylfi, that was offside.

“My opinion is really difficult decision.”

The Premier League confirmed to the PA news agency that the decision was taken due to Sigurdsson being adjudged to have been in an offside position in the direct line of vision of De Gea, whose ability to make the save was impeded.

Asked about the controversial conclusion, United manager Ole Gunnar Solskjaer said: “I have not spoken to (Ancelotti), just shook hands of course.

“It was drama towards the end.

“I don’t 100 per cent know the rule but David said he was distracted by the boy in his sight.

“I probably wouldn’t have been sent off after it was a goal, to put it that way, because you’re just hoping, fingers crossed, that they made a decision that is pro you.”

Solskjaer’s side certainly performed better than United’s embarrassing 4-0 capitulation on their last visit to Goodison Park last April, but they were unable to build on a strong first-half display

“We stuck together as a team,” he said, having defended under-fire De Gea.

“Some days you don’t play with the ball fantastically but I think we stuck together and grinded out a point.”