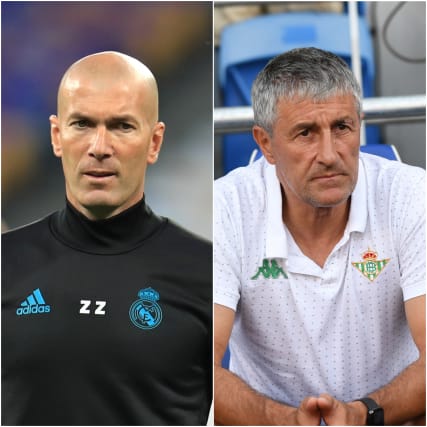 Real Madrid coach Zinedine Zidane has urged his stuttering side to ignore the naysayers and remain positive as they prepare to host title rivals Barcelona in El Clasico on Sunday.

Madrid head into the clash looking to bounce back from a largely miserable February which has threatened to extinguish any hope of further silverware this season.

In their last five games, Madrid have been knocked out of the Copa Del Rey by Real Sociedad, dropped five points against Celta Vigo and Levante in LaLiga, and been beaten 2-1 by Manchester City in the first leg of their Champions League last-16 tie.

To make matters worse, the defeats to Sociedad and City came at the Bernabeu, as did the 2-2 draw with Celta, and Madrid know another home setback against Barca – who are now two points clear at the LaLiga summit – could prove fatal to their title hopes.

Zidane, though, is determined to stay upbeat, and has urged Madrid’s fans to follow suit.

He told a pre-match press conference: “It’s a delicate moment because we’ve gone three games without a win in our stadium, but we know these things can happen.

“What we need to ensure is our mood is positive.

“It’s by sticking together that we’re going to get out of this and not listening to what’s being said.

“What we need is for our fans to be with us from the first minute to the 90th. I can understand if they are frustrated or annoyed, but we need them.

“We need to be positive and tomorrow we have the chance to change things.”

As well as their poor recent form, Madrid have also found themselves under scrutiny for their goalscoring record this season.

Only Karim Benzema has reached double figures so far, while in LaLiga their second leading scorer is defender Sergio Ramos with five goals – three of which are penalties

No other Madrid player has netted more than three times in the league but Zidane, who has been without Belgium playmaker Eden Hazard for much of the campaign due to injury, is not concerned.

He said: “I’m not worried because for four months we were winning games even without Hazard. We won a lot of games.

“The most important thing is our solidity and after that we know we can score goals.”

Hazard is sidelined again after breaking his ankle against Levante last weekend while Marco Asensio remains absent with a long-term knee injury.

Barca, meanwhile, are still without Luis Suarez and Ousmane Dembele through injury but Spain full-back Jordi Alba is available again.

The Catalan giants travel to the capital having won their last four league matches to wrest top spot off Madrid, while they also look handily placed to progress in the Champions League after drawing 1-1 at Napoli in midweek.

With that in mind, coach Quique Setien, who won twice at the Bernabeu while in charge of Real Betis, believes Sunday’s match is far more crucial for Madrid than Barca.

He said: “This game is important for us because of the advantage we could get. For them it’s a key game, maybe not decisive, but more important than for us because if we win we’ll go five points clear.”

Barca are unbeaten in their last seven meetings with Madrid, but Setien – who took charge in January – insists that record will have no bearing on Sunday’s encounter.

He added: “In these games the past is forgotten. It’s a Clasico, both teams will always give their all regardless of the situation they’re in.

“I’m expecting a tightly-contested game, very evenly matched. And it’s a question of who gets things right to win the game.”