West Ham climb out of relegation zone with Southampton win 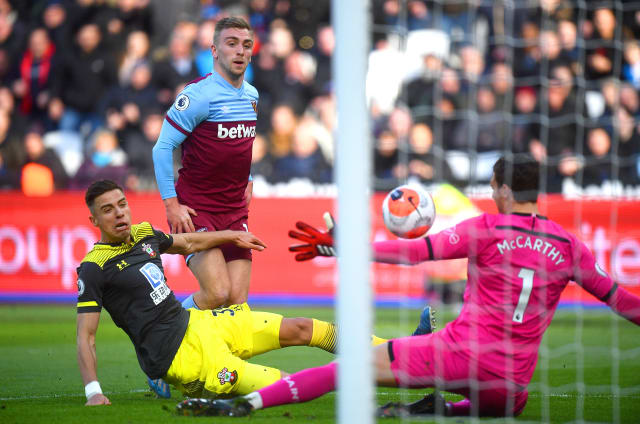 West Ham dragged themselves out of the Premier League relegation zone with a 3-1 win over Southampton at the London Stadium.

Jarrod Bowen marked his first start following a deadline-day move from Hull by firing the Irons ahead with a chipped finish in the 15th minute.

Southampton equalised in the 31st minute when Michael Obafemi converted a cutback from James Ward-Prowse.

West Ham, though, regained the lead five minutes before half-time as Sebastien Haller slotted in from a tight angle.

Michail Antonio made it 3-1 in the 54th minute after being put clear by Pablo Fornals’ lofted pass, sealing victory for the hosts.

David Moyes’ side are up to 16th, two points clear of Aston Villa, who drop into the bottom three, but having played a match more.

Bournemouth also looked set to boost their survival hopes before Chelsea scored a late equaliser to draw 2-2 at The Vitality Stadium.

Marcos Alonso had put the Blues ahead in the 33rd minute after Olivier Giroud’s effort had come back off the crossbar.

The home side, though, turned things around with two quickfire goals early in the second half.

Jefferson Lerma headed in the equaliser from Ryan Fraser’s cross after 54 minutes and just three minutes later Joshua King knocked the ball in at the back post.

Chelsea substitute Michy Batshuayi saw a goal ruled out for a clear offside, before wing-back Alonso got his second of the afternoon when he nodded in with five minutes left.

Bournemouth are 17th, also two points ahead of Carabao Cup finalists Villa, who have played a match less.

Newcastle and Burnley played out a goalless draw at St James’ Park.

Steve Bruce’s men, who had only one win in nine league games, created an opening on the half-hour when Miguel Almiron saw his low shot saved by Nick Pope.

Dwight Gayle sent an acrobatic effort just wide midway through the second half and Matt Ritchie saw his shot fly just off target, but there was to be no breakthrough.

The Seagulls, meanwhile, remain the only club in the top four divisions without a victory in 2020 and still very much looking over their shoulder.