West Ham climb out of relegation zone after beating Southampton 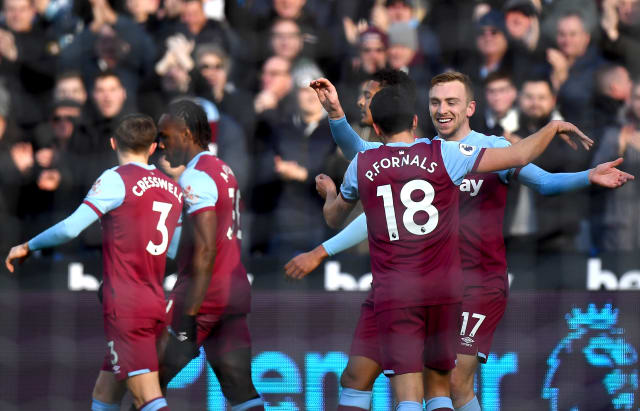 West Ham climbed out of the relegation zone as goals from Jarrod Bowen, Sebastien Haller and Michail Antonio sank Southampton 3-1.

Deadline-day signing Bowen marked his first Hammers start with the opening goal and ended up celebrating his first win in the Premier League, having suffered defeat in each of his previous nine matches.

Record signing Haller chipped in with his first goal since New Year’s Day after Michael Obafemi had equalised, and Antonio wrapped up a much-needed victory after half-time.

The mood at the end was in stark contrast to before kick-off, when a few thousand disaffected supporters staged the latest in a series of anti-board protests outside the ground.

Their resentment surrounding the move from Upton Park to the former Olympic Stadium remains, and a team boasting the worst home record in the Premier League this season has hardly helped matters.

West Ham are attempting to engage with the fans’ groups, but David Moyes’ more immediate concern was to arrest a run of seven matches without a win and the Hammers manager went for broke, naming Bowen, Haller and Antonio in a three-pronged attack.

It paid off after 15 minutes when Pablo Fornals played a delightful reverse pass into the area to Bowen, who took a touch with his right foot before deftly lifting the ball over Southampton keeper Alex McCarthy with his left.

The 23-year-old had been on the losing side in each of his seven top-flight matches for Hull, three years ago, and in his two substitute appearances for West Ham.

Saints boss Ralph Hasenhuttl’s decision to start without top scorer Danny Ings raised a few eyebrows before kick-off, but it was his replacement who hauled the visitors level after half an hour.

James Ward-Prowse reached the byline and sent in a low cross, with Obafemi’s first-time shot looping over Lukasz Fabianski into the net.

But Haller put West Ham back in front before the interval with a superb piece of improvisation.

The Frenchman, who has struggled to live up to anything like his £45million price tag this season, leapt to challenge McCarthy for Michail Antonio’s cross.

Haller won that duel but the ball was heading into touch until he slid in to somehow squeeze it inside the near post.

Hasenhuttl threw on Ings 10 minutes into the second half, but within moments West Ham doubled their lead.

The Hammers have dropped 22 points from a leading position this season, more than any other side, but Antonio ensured they would not be adding to that tally when he raced onto Fornals’ ball over the top and fired home.