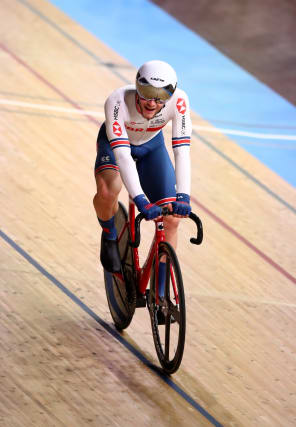 Matt Walls delivered Britain’s third medal of the UCI Track Cycling World Championships with bronze in the men’s omnium in Berlin on Saturday.

Walls put in a huge attack alongside Australian Cameron Meyer in the closing points race, gaining a lap on the field to vault up the rankings and earn his first career World Championship medal.

The medal was a welcome boost to the Great Britain team after a crash had ended the hopes of Elinor Barker and Neah Evans in the women’s Madison, leaving Britain still searching for their first gold medal of this week’s event going into the final day on Sunday.

With six-time Olympic champion Jason Kenny and a hobbled Jack Carlin suffering early exits in the men’s individual sprint, Britain’s haul of two silvers and a bronze so far leaves them with work to do to avoid this being their worst World Championship medal haul in an Olympic year since 1996.

Britain have not failed to win a gold medal at a World Championships in an Olympic year since 1992, but have only three opportunities left here – in the men’s Madison, women’s points race and women’s keirin.

After Laura Kenny’s heavy crash in Friday’s omnium, it was a similar story for her pursuit team-mates in the Madison.

Evans failed to clock the upcoming American hand-off and got herself stuck between Jennifer Valente and Megan Jastrab to cause the crash.

Though the Scot got back on her bike, she and Barker could not pick up any further points and finished sixth as the Dutch pair of Kirsten Wild and Amy Pieters retained their title.

“The crash was partly my fault,” Evans said. “There was a change but I didn’t see it until the last minute. By then I’d committed to coming over with a lot of speed and I hoped to be able to push them off a little bit but… yeah. The Madison is absolute mayhem.”

Britain continue to chop and change their Madison pairings given the wealth of options – Katie Archibald and Emily Nelson are former world champions, Barker is a former European champion, while the calibre of Kenny is clear.

Asked if this result will impact the selection, Barker said: “I don’t know. There is nothing else to select from going forward.

“It’s very subjective. It’s not team pursuit. There are no graphs. No specific power data to go off. There is nothing to say someone else would have done any differently in any given situation. I have absolutely no idea.”

Walls quickly lifted spirits with a strong finale to the omnium. He began the event with second place in the scratch race, but had dropped to fifth before the closing points race.

“I knew I had to get a lap somehow,” Walls said. “Luckily Cam was going and I jumped on with him and he pretty much dragged me round for the lap. It took us a while but eventually we got it and it paid off.”

Walls, fourth in Thursday’s scratch race, admitted it remains “tough” for him to earn selection for Tokyo within the men’s endurance squad, but was happy to keep improving.

“It’s unbelievable,” he said of his bronze medal. “It’s my second Championships. Last year I came away with sixth, earlier in the week I was fourth and now I’m third, so I just keep improving, keep learning from mistakes and coming back stronger.”

In the men’s sprint, Jason Kenny lost his 1/8 final to Germany’s Stefan Botticher – to the delight of the Berlin crowd – while a clearly struggling Carlin went out a round earlier, suffering with an ankle injury suffered in Thursday’s keirin.

Though he finished well short of the medal reckoning, Kenny put a positive spin on his exit given his qualifying time of 9.561 seconds, seventh best as Holland’s Harrie Lavreysen topped the timesheets with a 9.253.

“There’s not that long to the Olympics so to make a big step forward – we’ve been doing 9.7 and 9.8 – it’s an important step forward today,” Kenny said.

“We’re more to the front end of the field which is where we need to be if we want to be pushing for medals at the Games.”