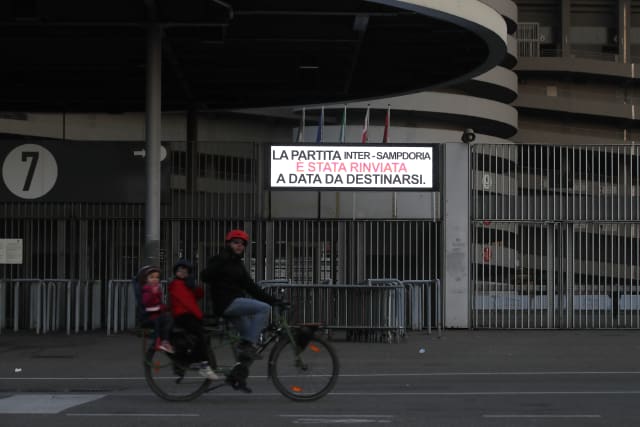 Five Serie A matches scheduled for this weekend have been postponed due to the spread of the coronavirus in Italy.

The matches, including Juventus’ hugely-anticipated clash, against Inter Milan, had initially been scheduled to take place behind closed doors.

However, in a statement, Serie A officials said the affected matches have all now been rescheduled for Wednesday May 13.

This weekend’s matches in the top two divisions in Switzerland had already been postponed after the government banned all events involving more than 1,000 people.

FIFA president Gianni Infantino promised on Friday to do whatever is necessary to help combat the continued spread of the virus.

Speaking in Belfast ahead of the annual general meeting of the International Football Association Board, Infantino said: “The health of persons is much more important than any football game.

“That’s why we have to look at the situation and hope that it will decrease rather than increase.

“At the moment it looks like it is still increasing. If games have to be postponed or played without spectators until it is over, then we have to go through that.”

Meanwhile global football players’ union FIFPro has revealed fears among its members of being made to play in “high-risk environments” due to the virus.

Meanwhile Danish cyclist Michael Morkov has been cleared to race at the UCI Track Cycling World Championships after two individuals suspected of having the coronavirus at the UAE Tour tested negative for the disease.

Morkov, 34, had spent 34 hours in isolation in Berlin after travelling to the German capital from the UAE Tour, where he contested the opening four stages before leaving the race early.

The final two stages of that race were cancelled on Thursday night when two members of staff on the race developed symptoms suggesting they could have the virus, and riders and staff on the race remain under lockdown in Abu Dhabi.

But, after the Abu Dhabi Department of Health issued a statement on Saturday saying the first 167 tests had come back negative, the UCI said Morkov was free to race as normal in Berlin.