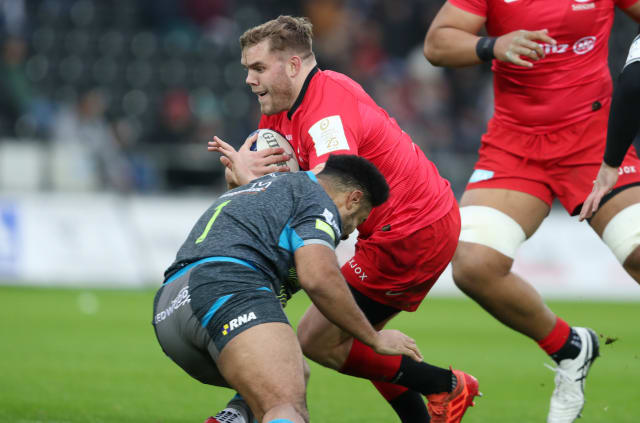 Injury-hit Saracens showed their resolve as they hit Northampton’s top-four hopes with a 27-21 win at Franklin’s Gardens.

Saracens lost three players to head injuries during the first half, with captain Wray, centre Duncan Taylor and full-back Alex Goode all forced off.

Northampton looked in control at 12-0 and 15-8 up at half-time, but Saracens took advantage of yellow cards for Lewis Bean and Taqele Naiyaravoro, with Jack Singleton and Nick Tompkins scoring, and Ben Earl rounded things off with an interception try.

The Saints, who had scored twice in the opening seven minutes, through Fraser Dingwall and Harry Mallinder, kept coming, but were dealt a fourth successive defeat in the Gallagher Premiership.

And there was more bad news for the Saints as Wales fly-half Dan Biggar was forced off in the first half with what looked to be a worrying injury.

Northampton had got off to a slick start as Alex Coles and Mallinder combined to set up England centre Dingwall for the opening score of the match.

Biggar missed the conversion, but Northampton were soon scoring again as Mallinder flew through a gap and stretched out an arm to get the ball down.

Biggar made amends with a much easier conversion attempt and the Saints were 12-0 up after just seven minutes.

But Saracens responded well this time and Rotimi Segun found space on the right before racing past two Saints players to score in the corner.

Manu Vunipola missed the conversion from the touchline, but he was on target with a penalty soon after as Saracens stretched the Saints defence again.

Mallinder was soon notching a penalty after he took the 10 jersey when Biggar was forced off.

Saracens then lost skipper Jackson Wray along with Taylor and Goode.

Northampton lost Bean to a yellow card four minutes after the break as his arm made contact with the head of Saracens scrum-half Richard Wigglesworth.

Naiyaravoro was then sin-binned for a deliberate knock-on close to his own line.

Saracens took immediate advantage as hooker Singleton powered over from a lineout drive, with Vunipola’s conversion levelling the scores at 15-15.

The Saints were soon behind as Tompkins glided through to score with plenty of numbers out left as Saracens streamed forward.

Vunipola made it 22-15 with the conversion and the hosts were now really up against it.

But Mallinder narrowed the gap with a penalty, but Saracens struck with a sucker punch, Earl pouching an intercept and racing in for the score to take his team 27-18 up with little more than 20 minutes to go.

Saracens back Matt Gallagher was sin-binned for a deliberate knock-on as Northampton tried to respond, and Mallinder landed a penalty to give his team late hope.

Alex Lewington was sent to the bin late, but Saints could not profit as they failed to turn things round.