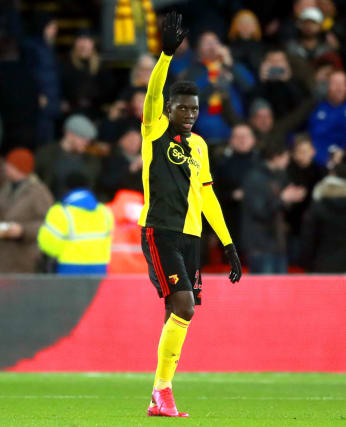 Premier League leaders Liverpool suffered a shock 3-0 defeat at relegation battlers Watford, while West Ham had earlier dragged themselves out of the dropzone with a 3-1 win over Southampton.

Liverpool were bidding to make it a record 19 Premier League wins in a row – but were out-battled by the Hornets, with Ismaila Sarr scoring twice at Vicarage Road

Watford winger Gerard Deulofeu had been causing Liverpool some early concern, but the Spaniard’s night ended early after being taken off on a stretcher with what looked like a serious knee injury following awkward fall.

Liverpool goalkeeper Alisson recovered to make a block at point-blank range from Troy Deeney after failing to deal with a high ball into the penalty area.

Sarr fired the Hornets ahead on 53 minutes when he converted a cross from Abdoulaye Doucoure at close range.

The Senegal winger then struck again on the hour, sprinting onto a quick through ball to lift the ball over Alisson.

Watford captain Deeney, though, made sure of a memorable victory when he knocked the ball in after Sarr had capitalised on a stray backpass from Trent Alexander-Arnold on 72 minutes.

Victory lifts Watford out of the bottom three on goal difference above Bournemouth, while Liverpool sit 22 points clear of Manchester City as their bid for an unbeaten Premier League campaign was ended.

Earlier, West Ham had seen off Southampton at the London Stadium to boost their survival hopes.

Jarrod Bowen marked his first start following a deadline-day move from Hull by firing the Irons ahead with a chipped finish in the 15th minute.

Southampton equalised in the 31st minute through Michael Obafemi.

West Ham, though, regained the lead five minutes before half-time as Sebastien Haller slotted in from a tight angle and Michail Antonio made it 3-1 in the 54th minute.

David Moyes’ side are up to 16th, two points clear of Aston Villa, who drop into the bottom three, but having played a match more.

Bournemouth also looked set to boost their survival hopes before Chelsea scored a late equaliser to draw 2-2 at The Vitality Stadium.

Marcos Alonso had put the Blues ahead in the 33rd minute after Olivier Giroud’s effort had come back off the crossbar.

The home side, though, turned things around with two quickfire goals early in the second half.

Jefferson Lerma headed in the equaliser from Ryan Fraser’s cross after 54 minutes and just three minutes later Joshua King knocked the ball in at the back post.

Chelsea substitute Michy Batshuayi saw a goal ruled out for a clear offside, before wing-back Alonso got his second of the afternoon when he nodded in with five minutes left.

Newcastle and Burnley played out a goalless draw at St James’ Park.

Miguel Almiron had a low shot saved by Nick Pope and Dwight Gayle sent an acrobatic effort just wide midway through the second half.

The Seagulls, meanwhile, remain the only club in the top four divisions without a victory in 2020 and still very much looking over their shoulder.