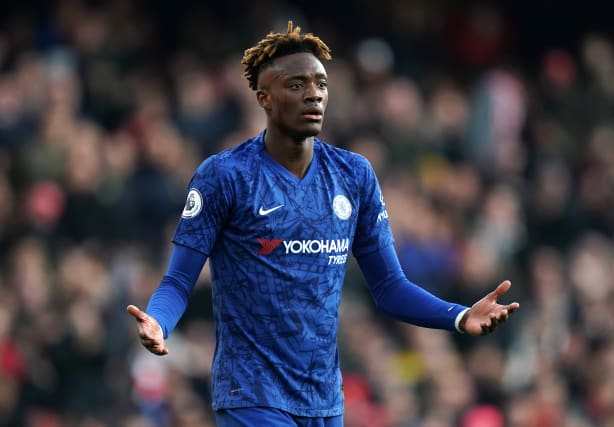 Tammy Abraham has seen a specialist in Barcelona in a bid to solve his troublesome ankle injury.

Frank Lampard revealed the Chelsea striker has sought “more advice” on the ankle concern, with the Blues still unsure on when the 22-year-old will be fit.

Abraham played through the pain of his ankle problem in Chelsea’s 2-2 draw at Leicester on February 1, but pulled up with a recurrence of the issue in the warm-down after Tuesday’s 3-0 loss to Bayern Munich.

Chelsea host Liverpool in the FA Cup on Tuesday night, with boss Lampard admitting he still does not know whether Abraham will be fit.

“Tammy went to Barcelona, to have a look at his ankle for some more advice on it,” said Lampard, after Chelsea’s 2-2 Premier League draw at Bournemouth.

“I’ve got no update for you. I’m hoping it’s not a long-term injury but I can’t tell you if he’ll be ready for Tuesday or Saturday.”

Marcos Alonso struck twice to salvage the Blues a draw at Dean Court, though Jorginho will now face a two-match Premier League ban for his yellow card.

The Spain full-back blasted Chelsea into the lead, only for Jefferson Lerma and Josh King to register two goals in three minutes to turn the tie on its head.

Alonso nodded home after Aaron Ramsdale parried Pedro’s shot on the half-turn however, to ensure Chelsea avoided a 10th league loss of the campaign – and that the Blues cling onto fourth place in the table.

Manchester United would have had the chance to leapfrog Chelsea with a victory at Everton had the Blues lost at Bournemouth, leaving Lampard with mixed emotions on another inconsistent afternoon for his side.

Olivier Giroud flicked a sumptuous backheel against the bar in the build-up to Alonso’s opener, but the France striker also passed up a glorious chance when mixing up his feet and bundling the ball wide.

In the latest episode of Chelsea squandering a glut of openings, Lampard was once again left to lament his side’s attacking shortcomings.

When asked about missed chances, Lampard said: “It’s costing us in games.

“Everyone wants to point to the defence, but we work all week on our defence.

“It’s hard to create actual situations like someone out-jumping your man or someone diving in and getting done when they shouldn’t do as a centre-back.

“But at the same time if you’re going to create something like 23 chances and balls slashing across the face, those are the chances that you need to stick away. That’s what creates the nervousness.

“At 1-0, Bournemouth are in that game, at 2-0 I think we start to control and finish the game off.

“I sit here a lot and say that, it’s a clear part of our season. We’ve created a lot again, but we need to stick the ball in the back of the net.

“I’m very happy for Marcos Alonso but when I think that my left-back is the one scoring the two goals and he scored our last goal in the league as well, and you’re creating that many chances in between, you have to question why we’re not finishing them.”

The draw keeps Bournemouth just above the relegation zone, two points ahead of Aston Villa despite the Birmingham side now having a game in hand.

Boss Eddie Howe hailed his Cherries for pushing on to a better run of form, but admitted the relegation battle is still too close to call.

“I think we’re in a better place than a few weeks ago, the last five performances have been stronger and we’ve started to score goals and create chances from open play,” said Howe.

“We’re not where we want to be though, and it’s going to be really tight and a big battle to get the points we need from now until the end of the season.

“We are in a better place however, and we’re prepared to fight for the challenge ahead, but I cannot predict what it will take for safety, it’s too tight.”