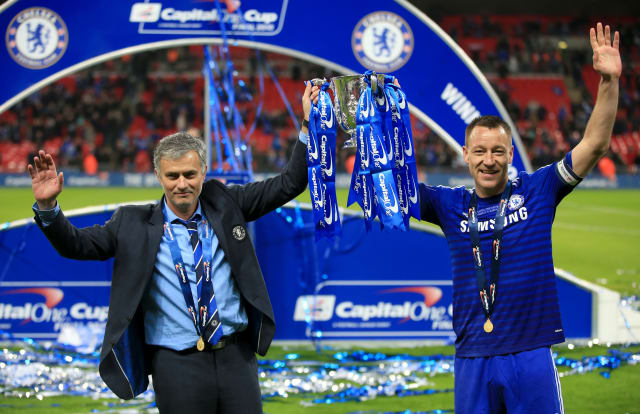 Aston Villa manager Dean Smith believes assistant head coach John Terry’s own League Cup triumphs will serve as a spur to his players as they aim to pull off a shock success on Sunday.

Terry lifted the trophy on three occasions during his time with Chelsea, with Smith revealing he took his son to watch the Blues’ last victory in 2015 when they beat Tottenham 2-0.

Five years on and Terry will be on the touchline with Smith for the Carabao Cup final against Manchester City, as the duo aim to end the two-year reign of Pep Guardiola’s side.

“I’ve used John as a pointer to the players very often in this competition, and how much it meant to him to lift a trophy,” said Smith.

“People can belittle the League Cup as being below the FA Cup, but you try and take one of those off John Terry and he’ll tell you quite markedly what he believes. He openly talks about the need to go and win trophies and finals.

“Winning the play-off final last season has given us that appetite for more, that’s why we’ve probably been frustrated by our league position. This is our opportunity to realise those ambitions of winning trophies.

“Over a 15-year career, the players will get 45 opportunities to win something. They got a promotion last year and a medal for that, this time they can get a domestic final winners’ medal. Opportunities like that don’t come along very often.”

Villa go into the game as heavy underdogs as a run of three successive league defeats has them fighting to avoid an immediate return to the Sky Bet Championship, while City will be buoyed after claiming a memorable Champions League scalp with victory at Real Madrid in midweek.

If omens can play a part, 26 years ago Villa faced a similar situation as they had lost three successive league games before taking on a Manchester United side who were odds-on favourites for the win, yet they conjured a remarkable 3-1 success.

“The emotions are streets apart. It’s a place where you go to try and win because winning is the best feeling when you’re there.

“You look at 24 years ago (when Villa beat Leeds 3-0 in the 1996 League Cup final), with the likes of Ian Taylor and Andy Townsend lifting the trophy. Then in ’94, Dalian Atkinson, Dean Saunders, even Graham Fenton, who came in when people didn’t expect him to.

“I was there and I was surprised at the time when the team sheet came through. As I would say to anybody, I’m the one who knows what the best team selection is for us. I’m the one who sees them training every day.

“Big Ron (Atkinson) was proven right that day. It was 26 years ago and it was a long time, but what we will do is pick a team that can go out and win.”