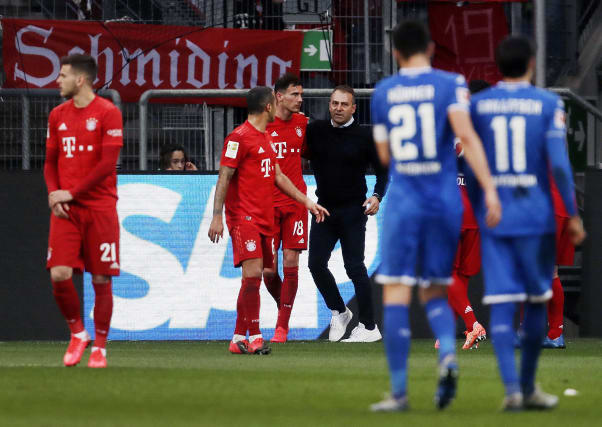 Bayern Munich’s 6-0 win at Hoffenheim was overshadowed following a delay caused by an offensive banner in the away end which saw the two teams play out time over the closing stages.

The Bundesliga leaders had gone 3-0 up inside 15 minutes with goals from Serge Gnabry, Joshua Kimmich and Joshua Zirkzee.

Philippe Coutinho scored either side of half-time, with substitute Leon Goretzka slotting in a sixth just after the hour mark – but the match ended in bizarre fashion.

With just under 15 minutes left, visiting Bayern fans unfurled an offensive banner aimed at Hoffenheim owner Dietmar Hopp – the billionaire software entrepreneur who has bankrolled the club’s rise to the German top flight.

The match was suspended twice by the referee, with Bayern players and staff – including manager Hansi Flick – having gone over to remonstrate with the supporters to remove the flag.

The players were taken off the field for a lengthy delay. When they returned, both teams proceeded to pass the ball around at a slow pace, with goalkeepers coming up towards the centre circle as the clock was run down.

Following the final whistle, both sets of players and management – including Bayern chief executive Karl-Heinz Rummenigge – came together in front of the home fans as a show of collective support for Hopp.

Rummenigge later apologised on behalf of the club for the actions of the Bayern supporters involved, and declared those responsible would be held to account.

Despite the surreal ending to the match, the convincing victory saw Bayern move four points clear of RB Leipzig, who play on Sunday.

Elsewhere in the Bundesliga on Saturday, third-placed Borussia Dortmund beat Freiburg 1-0 with an early goal from England winger Jadon Sancho.

Borussia Monchengladbach are fourth after a brace from Lars Stindl helped secure a 3-2 win at Augsburg, where all five goals came during the second half.

Bottom club Paderborn lost 2-0 at Mainz, which was a third straight league defeat.

In Serie A, Lazio moved to the top of the table with a 2-0 win over Bologna.

Five fixtures across the weekend were postponed due to the spread of the coronavirus in Italy – including the hugely-anticipated clash between champions Juventus and title rivals Inter Milan.

Saturday’s match at the Stadio Olimpico was able to go ahead – with Luis Alberto and Joaquin Correa both on target during the first half.

Lazio moved two points in front of Juventus, whose game with Inter is now set to be played on May 13.

Torino pulled a goal back during stoppage time from substitute Simone Edera.

The Partenopei, who had drawn their midweek Champions League match against Barcelona, are in sixth place, three points ahead of AC Milan.

In LaLiga, Valencia closed up on the top six with a 2-1 win over Real Betis.

Kevin Gameiro put the home side ahead on the hour, with captain Daniel Parejo wrapping things up late on. Loren Moron scored a consolation for Betis in stoppage time.

Strugglers Leganes picked up a point after a 1-1 home draw against Alaves, while the late match between Granada and Celta Vigo finished goalless.

Rennes kept up their Champions League qualification push with a 2-0 win at bottom club Toulouse.

Strugglers Amiens were beaten 1-0 at home by Metz, while it finished 1-1 between Monaco and Reims.

Angers won 1-0 at Brest, and a brace from Teji Savanier helped Montpellier end their two-match losing streak with a 3-0 home win over Strasbourg.