Arteta admits families of Arsenal players are ‘concerned’ by coronavirus 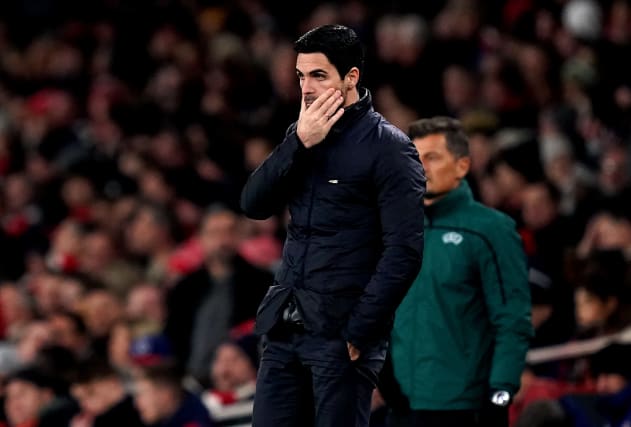 Mikel Arteta has revealed the families of his Arsenal players are “concerned” by the ongoing coronavirus outbreak.

Fixtures on the continent have already started to fall foul of the virus as countries battle to contain it.

Five Serie A games will be played behind closed doors this weekend, while the Swiss Super League has postponed their matches.

English football has yet to suffer but some clubs have instructed players not to shake hands while the likes of Arsenal and Tottenham have issued forms to visitors to their training ground in an attempt to prevent potential cases.

Arteta said he and his squad will continue to follow medical advice but did concede there are worries from the families of those players who are based overseas.

“(We are) not anxious, obviously we read the information, it’s all the time in the media,” he said. “Our families are concerned, we have a lot of foreign players with foreign families in different countries so it’s something that is on a daily basis.

“The club and the authorities are in contact every day. We are following all the instructions from the club doctor.

“So far the protocols we have been doing are enough but obviously don’t know to what stage it is going to develop.

“We’ve seen in other countries the difficult decisions they have to make around it to protect the situation so we have to wait and see and be guided by them.”

Sheer fixture congestion seems to be more of a pressing worry for Arteta as he prepares his side for their FA Cup fifth-round clash at Portsmouth on Monday night.

After crashing out of the Europa League to Olympiacos with the last kick of extra-time on Thursday night, Arteta knows the pressure is on to take the club into European competition for next season.

Sitting ninth in the Premier League heading into the weekend’s fixtures, the FA Cup could yet be the tournament to provide Arteta with a route to the Europa League.

With the FA Cup ties being moved to midweek there is a level of congestion in the coming weeks after the first-ever Premier League winter break earlier in the year.

Arteta believes, with Carabao Cup fixtures also in the mix, there is too much strain being placed on the modern player.

“We’re not going to please everyone with the decisions that have to be made,” the Spaniard replied when asked about fixture congestion.

“What is for sure is that for players it’s an enormous amount of games. The intensity is raising every single year, the level of pressure too, and sometimes it’s too much for them.

“Something has to be done because you can see players are cracking and cracking every season.

“You can sustain that for one season, two seasons, but after three or four seasons you end up paying the price and I think the quality at some stage will drop.

“But as well we have a history, a massive culture here with the cup games, and to go against that is difficult.”