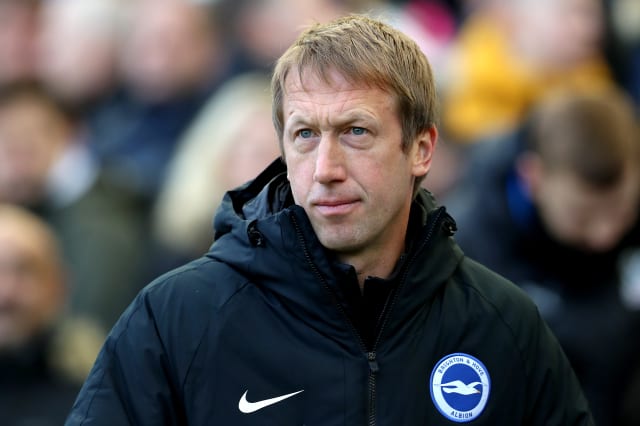 Graham Potter insists Brighton cannot afford to feel sorry for themselves after their dismal start to 2020 continued with a “sore” derby defeat to Crystal Palace.

Albion remain the only club in the top four divisions without a victory this calendar year following a disappointing 1-0 home loss to their bitter rivals.

Jordan Ayew’s 70th-minute strike settled the south-coast clash in the Eagles’ favour to leave the Seagulls with a solitary success from 14 games in all competitions and precariously perched above the drop zone.

Brighton dominated possession at the Amex Stadium and registered 24 attempts at goal, leaving head coach Potter to bemoan his team’s misfortune, while challenging them to swiftly move on.

“They didn’t do too much to get their goal, which is disappointing, against the run of play.

“But that happens in football, if you don’t score then you leave yourself open to something. We did enough in the game to get something. It’s a sore one for us.

“That’s life sometimes. We have to accept it, we can’t feel sorry for ourselves. We have to take the fight, we have to show our quality, that’s where we are at.

“I believe in the players. I believe in what we’re trying to do. I believe that we’ve shown enough today to say that we can win football matches.

“Sometimes luck is a commodity that you need and we didn’t have too much of that.”

Palace hit the hosts on the counter-attack to pick up a first away win since November 30.

Albion trio Solly March, Lewis Dunk and Neal Maupay had each failed to make the most of good opportunities, before Ayew punished them by finishing a slick through ball from Christian Benteke

Brighton have taken 28 points from as many games ahead of a challenging run of fixtures, which includes clashes with Wolves, Arsenal, Leicester, Manchester United, Liverpool and Manchester City before the end of April.

“We have to keep focusing on the positives, keep focusing on what we’ve done well, keep working and hopefully we can get that luck, those margins, in our favour. That’s the challenge,” said Potter, who in November extended his contract to 2025.

“All the games in the league are difficult. Nothing changes from that perspective.

“It’s not about looking at which fixtures are supposedly easier, it’s about focusing on the next game, trying to win, that’s what we’ve tried to do, and we’ll do the same.”

Ayew’s decisive strike was his seventh of the season, with his side picking up 17 points from the games in which he has scored.

Palace boss Roy Hodgson, who is poised for contract extension talks next week, praised the crucial contribution of the Ghana forward as the visitors took another significant step towards safety.

“Last year, he did a great job when he was on loan. We made that loan permanent at the start of the season because we knew what he could do,” said Hodgson.

“But of course last year he didn’t score many goals and that was something which bothered him and I suppose was a factor for us, are we going to get the goals out of him that we need?

“He’s scored a large proportion of our goals and still contributing to the team in so many other ways. His contribution without goals is enormous, that work-rate, that desire, that constant thorn in the opposing team’s defence.”

Albion substitute Ezequiel Schelotto sparked a minor first-half melee when he was booked for kicking the ball at Wilfried Zaha.

Asked about that incident, Hodgson, whose side now sit on 36 points, replied: “I’m just glad that Wilf didn’t lose his head, that’s important. Luka (Milivojevic) did well to come in and stop that.

“But if that’s the worst thing that’s going to happen in a derby game of this nature then I think we’ve done quite well.”