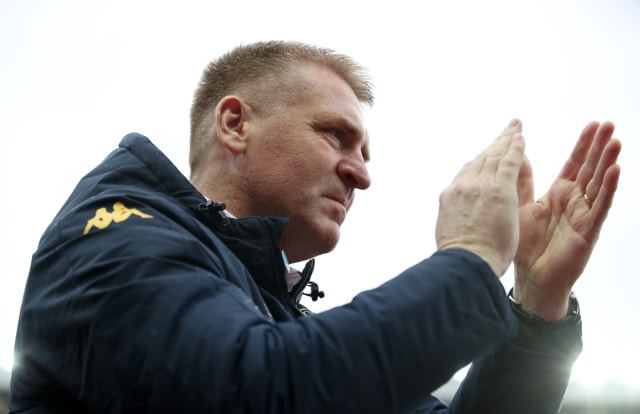 Aston Villa boss Dean Smith has urged his players to embrace the role of underdog in Sunday’s Carabao Cup final.

Villa go into the game on the back of three successive Premier League defeats, while opponents Manchester City will be buoyed from a stand-out victory over Real Madrid at the Bernabeu in the Champions League on Wednesday.

Villa have also been beaten by an aggregate of 9-1 in their two league encounters with City this season, including a 6-1 hammering at home in January.

Despite that, Smith said: “It’s an opportunity for our players to etch themselves into the history of the club.

“We’re massive underdogs against a world-class team, but I can only name one or two other teams who wouldn’t be underdogs going into the game against City.

“They’re a fantastic team, no matter which 11 they put out, and they’ve a fantastic coach which is why they can go to the Bernabeu and get a result.

“But I like sometimes being the underdog because we can go and have a good fight without people expecting anything of us.”

To that end, Smith does not see Villa’s first appearance in a cup final as any kind of burden.

“It’s not a weight,” he said. “If anybody had told me nine years ago, when I started out as manager of Walsall, that I’d be a Premier League manager leading Villa into a cup final with a chance to win a trophy then I would have said they’re crackers.

“We’ve done well to get to the final, and now we’ve an opportunity against one of the world’s best teams.”

Smith is aware, though, Villa have to raise their game following their dismal recent run, culminating in last Saturday’s wretched performance in a 2-0 defeat at Southampton.

A furious Smith warned then that a number of players had played their way out of the final, and he is now hoping that in showing a mean side they will respond.

“For three games now we’ve just not started well enough, not played to the standards that are acceptable for us and them.

“They dropped those standards and they needed telling publicly. I didn’t say anything in the press I had not said in the dressing room.

“Over this past week I’ve at least seen a reaction.”

Smith has confirmed midfielder John McGinn will definitely miss out despite his stringent efforts to return from an ankle injury that he suffered just before Christmas.