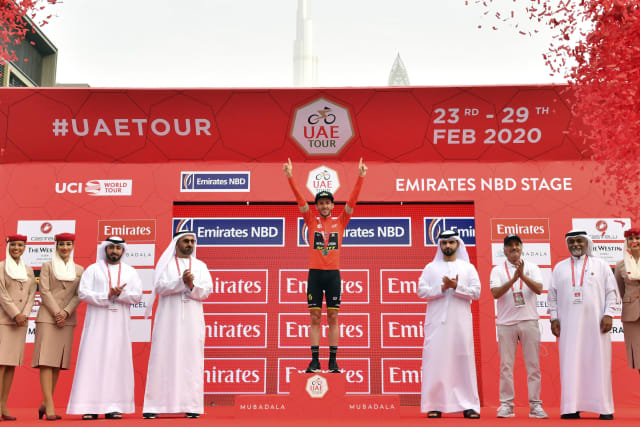 The UCI has said the UAE Tour was cancelled due to “suspected” cases of coronavirus as it emerged at least one of the two staff members involved may have tested negative for the disease.

Four-time Tour de France winner Chris Froome and sprinter Mark Cavendish are among a star-studded field of riders now in lockdown in Abu Dhabi, with all riders and staff at the race to be tested.

Statements on Thursday night from the Abu Dhabi Sports Council and organisers RCS Sport said the race had been cancelled due to two positives tests, but on Friday cycling’s world governing body indicated the decision was made before the results were known.

It is now understood at least one of those tests came back negative, but authorities in the United Arab Emirates took the decision to act early to prevent a possible outbreak.

“The Union Cycliste Internationale (UCI) confirms that the two final stages of the UAE Tour (23-29 February), which were to be raced Friday and Saturday, were cancelled late yesterday evening after two cases of coronavirus were suspected among two staff members of one of the participating teams,” the UCI’s statement said.

“While waiting for the results of tests and their communication, the United Arab Emirates authorities, the event’s Organising Committee and the UCI, by mutual agreement, took the decision to interrupt this event, the third race on the 2020 UCI WorldTour calendar, in the interests of the health of riders and their staff, and to avoid the virus spreading.”

Questions were then raised over the UCI Track World Cycling Championships, taking place this week in Berlin, as Danish cyclist Michael Morkov had arrived in the German capital on Thursday, planning to compete in Sunday’s Madison after contesting the first four stages of the UAE Tour.

Morkov was seen at the velodrome on Thursday but is now being kept in solitary confinement at his team’s hotel, where he is due to be tested for coronavirus.

It is understood the 34-year-old feels fine and has shown no symptoms, with his only complaint being that he is unable to visit the velodrome.

A spokesperson for the Danish team said the team still expected Morkov – who is training on a stationary bike in his room – to be able to race this weekend.

One other rider, Spaniard Alberto Torres, had been due to travel from the UAE Tour to compete in Berlin, but did not leave before the lockdown was imposed.

The 29-year-old’s Movistar team said Torres would only travel if given the all-clear by authorities.

British Cycling has remained in constant contact with the UCI’s medical team regarding the situation but is continuing operations as normal.

The World Championships are the last major competition before the Tokyo Olympics.

The lockdown remains in place in Abu Dhabi, where Team Ineos’ Froome and Bahrain-McLaren’s Cavendish were among six Brits taking part in the WorldTour race.

Mitchelton-Scott’s Adam Yates has now been declared the overall winner, having been in the leader’s red jersey after the fifth stage.

A tweet from Dowsett’s Israel-Start Up Nation team on Friday morning said the results from the tests were expected within 24 hours.

“The virus tests results of all teams will arrive in 24 Hours,” the tweet said. “Implication: leave? Stay for two weeks locked in? No chance for future decision before tomorrow. #UAETour”

Froome had been using the race to make his long-awaited comeback from the career-threatening injuries he suffered in a high-speed crash during a recon ride at the Criterium du Dauphine last June.

“It’s a shame that the #UAETour has been cancelled but public health must come first,” Froome wrote on Twitter on Thursday night.

“We are all awaiting testing and will remain at the hotel until further notice. I hope those affected make a speedy recovery and there aren’t any further cases #coronavirus”