Kenny rides on after crash in World Championships scratch race 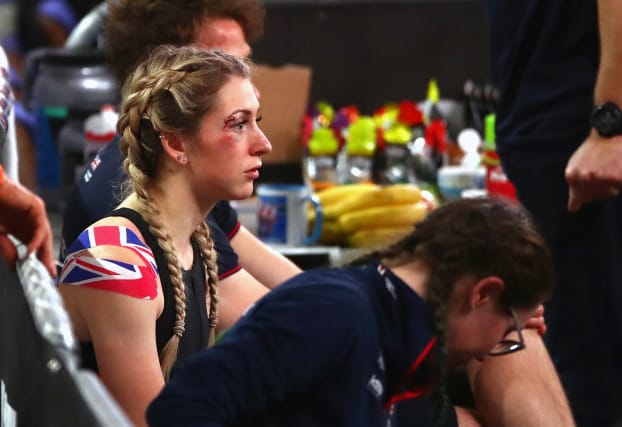 Laura Kenny rode on in the omnium at the UCI Track Cycling World Championships in Berlin despite being left bloodied and bruised by a nasty crash in the opening scratch race.

The four-time Olympic champion, racing here only a month after breaking her right shoulder in a crash during the omnium at the final World Cup in Canada, was caught up in a big spill just before the bell to start the final lap of the race.

Canada’s Allison Beveridge went down in front of Kenny, who had nowhere to go as she too hit the deck.

Mexico’s Lizbeth Salazar was equally helpless as she hit the stricken Kenny at high speed, with a total of five riders caught up in the incident.

Kenny, bleeding close to her right eye, received lengthy treatment at the side of the track before being given stitches and going through a concussion check.

Kenny fell hardest on her right hip, sparing the injured shoulder the full force of the blow, with the cut and subsequent black eye caused by the visor on her helmet.

The 27-year-old has already had a successful few days in Berlin, picking up team pursuit silver on Thursday despite insisting last week she would not race in the event, and finishing fourth in Wednesday’s scratch race.

She could therefore have been forgiven for pulling out of the rest of the omnium, but having been given the all-clear she wanted to use the race as a learning opportunity against her Olympic rivals.

Kirsten Wild, the reigning omnium world champion and a major threat to Kenny’s Olympic crown, was relegated for causing the crash despite being a couple of bike lengths in front, with commissaires blaming the Dutchwoman for a domino effect.