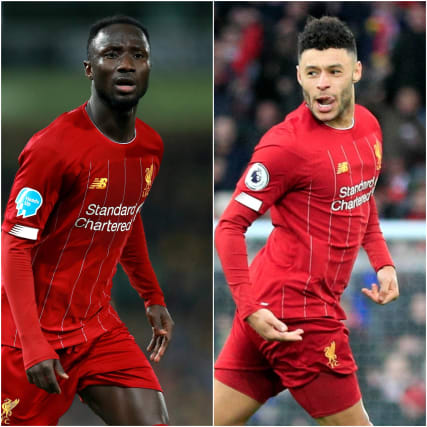 Liverpool manager Jurgen Klopp insists Naby Keita and Alex Oxlade-Chamberlain are not competing with each other for the current vacant midfield place.

Jordan Henderson’s hamstring injury is likely to sideline the Reds captain for possibly another fortnight and with Fabinho and Georginio Wijnaldum virtually locked in there appears to be one spot left to fill.

Keita got the nod against West Ham but after beginning brightly he faded quickly and made way for Oxlade-Chamberlain after 57 minutes with the side 2-1 down.

His replacement had an immediate impact and played a key role in changing the momentum on the way to a 3-2 victory which maintained this season’s unbeaten Premier League record.

Keita is something of a conundrum as there is a sense that he is not yet operating at the level which convinced Liverpool to spend £52.75million – and agree a deal a year in advance – to bring him from RB Leipzig in the summer of 2018.

The Guinea international has been affected by untimely injuries during his 18-month spell which has curtailed his progress and although Oxlade-Chamberlain spent almost a year out with a serious knee injury, performances suggest he is currently in better form.

However, Keita’s statistics (he has not lost any of the 34 Premier League matches he has featured in and his individual on-field numbers regularly look good) hint that he should be – and actually is – doing better than the perception.

The pair are again contesting a starting berth against Watford on Saturday but Klopp did not want the pair to think they had to outdo each other.

“They’re not competing against each other and hopefully they don’t see it like this. It’s not like this,” he said.

“They offer naturally different things. Naby can play better, obviously, and has played better. But that wasn’t the reason the (West Ham) game was like it was.

“Then Oxlade came on, really fresh and with his natural skill, having direction, speed, it’s a different player.

“In different situations we need different players and they all are exceptional.

“Until the change, we were more fixed in positions. It wasn’t flexible enough or unpredictable enough, we were too easy to defend, we didn’t really come through.

“In other situations we were too high on the wings and were hit on counter-attacks.”

Liverpool’s game against West Ham was the first time they had been behind in a Premier League match since November 2 at Aston Villa.

If Klopp’s players were getting comfy with their 22-point lead at the top – with just four more victories guaranteed to lift a first title in 30 years – then that game could be the wake-up call they needed.

“I watched the game back, and in that game being 2-1 down helped us a little bit because the direction after that, a lot of things were different,” added Klopp.

“I didn’t know it was the first time since Villa, but the boys reacted well and that’s the only thing we have to know.

“Some people used the word complacency, that they saw glimpses of that. I didn’t see that at all.

“It’s a long season and the concentration level can drop from time to time in all teams, in games and between games. How much the boys fight for a result is exceptional.

“There is no fear about anything, but we also don’t take it for granted that there will just be one or two goals up.