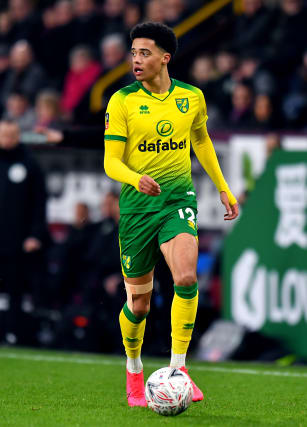 The Northern Ireland international had not scored for the Canaries since January 2018, but he cleverly volleyed past goalkeeper Kasper Schmeichel to give his side the lead with 70 minutes gone.

Brendan Rodgers’ Leicester were without top goalscorer Jamie Vardy, who was ruled out with a calf problem, and the hosts were unable to find the net in his absence, and have now gone five games without a win in all competitions.

Leicester did have the ball in the net through Kelechi Iheanacho’s second-half effort, only for it to be ruled out on VAR review for handball.

On the anniversary of Delia Smith’s “let’s be having you” speech, the win means the Canaries have closed the gap to 17th-placed Aston Villa to just four points.

Hamza Choudhury headed an early Leicester opportunity over the bar, before Ben Godfrey nodded straight at Schmeichel at the other end.

Teemu Pukki has struggled for goals recently, finding the net just twice this year, and his first chance of the game, after being played in by Ondrej Duda, was blocked by Caglar Soyuncu.

After a slightly lacklustre start, Norwich found themselves on the back foot, with Ricardo Pereira’s cross guided onto the outside of the post by Praet as the visitors looked lively.

Ayoze Perez had been quiet for the opening half an hour, but had a good chance, forcing Krul into a low save just minutes before team-mate Iheanacho fired the best chance of the first half over the bar from close range.

Leicester started the second half on top, and were almost rewarded for it after Iheanacho curled the ball into the back of the Norwich net.

But the goal was ruled out after a VAR review judged the Leicester forward had handled the ball before taking the shot.

Despite the visitors enjoying most of the possession in the second half, Norwich came close to taking the lead when Duda turned and fired the ball towards the goal from distance, forcing Schmeichel into a flying save midway through the second half.

The Slovakian midfielder then had another crack at goal, after being played in by Emi Buendia, but Schmeichel was again up to the task and able to make the save and deny Duda for a second time.

With less than a quarter of the match remaining, it was Lewis who put the home side ahead, controlling the ball on his chest before volleying the ball with the outside of his left boot into the bottom corner.

After taking the lead, Norwich were forced to defend deep by Leicester, with Max Aarons making some long clearances to try and ease the pressure on the home defence.

With Leicester committing forwards to try and get the equaliser, they were almost caught on the counter, but substitute Josip Drmic’s curled strike was saved by Schmeichel.