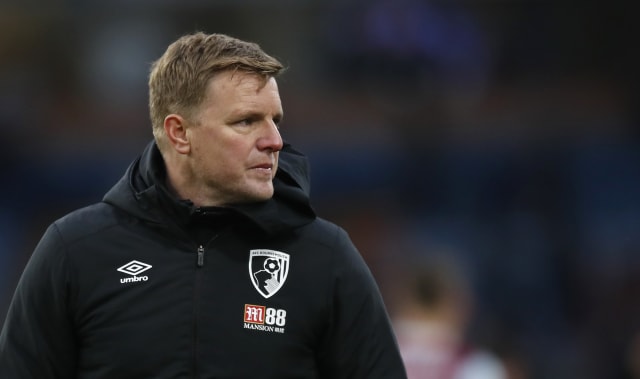 Eddie Howe hopes seeking answers and “dialogue with the authorities” over VAR can help Bournemouth move on from the fall-out of their controversial defeat at Burnley.

Howe accepted his players fell apart after being denied an equaliser and simultaneously having a penalty awarded against them in last weekend’s 3-0 loss at Turf Moor.

The Cherries – who had also seen Joshua King’s first-half goal ruled out for a suspected handball at a corner – remain deep in the battle for Premier League survival, just two points above the dropzone.

Chelsea head to the Vitality Stadium on Saturday, when Howe wants everyone to focus on the battles ahead and not reflect on any sense of injustice.

“We’ve had dialogue with the authorities to try and get a better understanding of the thought processes behind the decisions, basically,” the Bournemouth boss said.

“We left Burnley obviously very disappointed with the result, analysing incidents in the game to see how conclusions and decisions were made.

“It was quite difficult because when you are seeing one thing and you think ‘I can’t see how that’s gone against us’ I think you have to seek answers.

“Not that you are going to change the decisions, you are not looking to do that, but just so you have a better understanding of the process involved.”

Howe said at a press conference broadcast by the club: “It’s still a little bit grey to be honest in my mind as to how those decisions were reached, despite having communication with the appropriate people.

“But it is something we have to accept. We are definitely not going to change it now.

“Our mindset has to be that we are very much focused in the moment and preparing for Chelsea, but learning from the events of last week.”

Howe believes in general the introduction of VAR over offside, when applied consistently, has been “pretty good”.

However, the Bournemouth boss stressed: “There has still been some bad decisions even with VAR. I would like to trust the on-field referee a little bit more.

“I think the way the game is going, VAR is not going to disappear so maybe the on-field referee using the monitors more to back his decision or to change his call, but I still think it should be in his hands.”

Defender Nathan Ake could return to face his former club, having sat out the Burnley game because of concussion.

Howe hopes the compact Vitality Stadium crowd can help lift the team in their fight for top-flight survival.

“Their reaction to us and our situation has been of the highest level,” the Bournemouth boss said. “We are going to need them as much as ever going into the final games of the season.”

Chelsea will be out to respond from their 3-0 home Champions League defeat by Bayern Munich.

Howe added: “We know how tough this is going to be.”