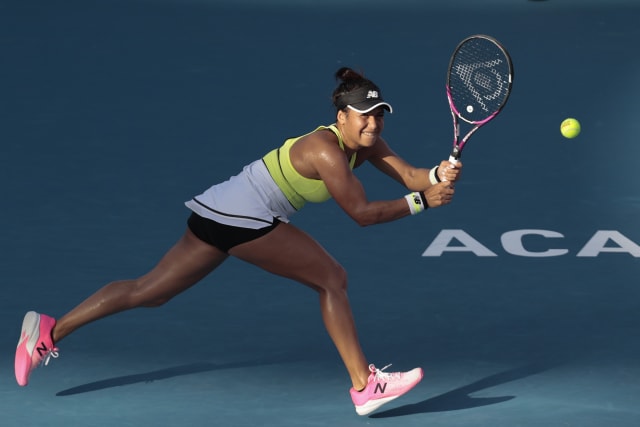 The British number two is enjoying a fine start to the season and she continued that with a 6-4 7-6 (6) victory over 18-year-old Wang.

Watson is the highest-ranked player left in the draw and will face either Mexican wild card Renata Zarazua or Canadian teenager Leylah Fernandez in the final.

Watson’s last title came in Mexico, at the tournament in Monterrey in 2016. It has been a tough road since, with the 27-year-old dipping in and out of the top 100, but she ended last season by reaching the final of the Tianjin Open and has not looked back.

She began 2020 by making the semi-finals of the Hobart International and this victory will lift her to 55 in the world rankings on Monday. If she can claim the title, Watson will return to the top 50 for the first time in nearly four years.

Watson said on Amazon Prime: “In 2016 I won in Monterrey and that was such great memories for me. I just love it here in Mexico.”

Earlier, Dan Evans’ fine run at the Dubai Duty Free Tennis Championships ended with a 6-2 6-3 defeat against Stefanos Tsitsipas in the semi-finals.

Playing the fourth ATP Tour semi-final of his career, and first at a 500 tournament, Evans was comfortably beaten by world number six Tsitsipas, who did not face a break point during the match.

Evans had battled through to the last four with victories over Fabio Fognini, Pierre-Hugues Herbert and Andrey Rublev and will break into the top 30 for the first time on Monday.