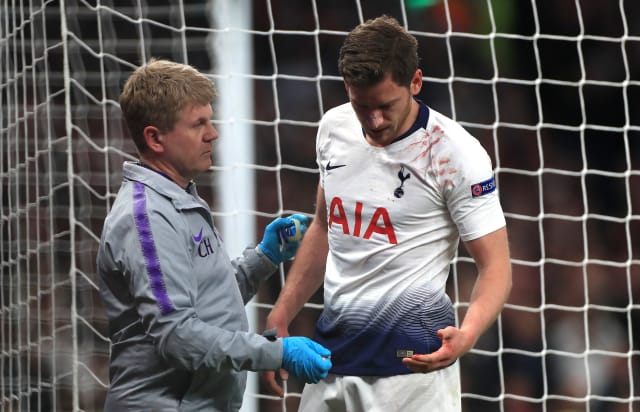 A member of the expert concussion group set up to advise football’s law-makers is “pessimistic” about the prospect of 10-minute temporary concussion substitutions being piloted next season.

The International Football Association Board (IFAB) is holding its annual general meeting in Belfast on Saturday, with a discussion on managing and assessing suspected concussion on the agenda.

However, Dr Vincent Gouttebarge, the chief medical officer of world players’ union FIFPRO, says there was “no consensus” in terms of the best way forward when the expert group which will advise the IFAB met at the end of January.

Gouttebarge feels football’s administrators are “making fools of themselves” with what he sees as the slow progress being made in this area.

He favours a 10-minute assessment period for a player suspected of concussion with a temporary substitute coming on, and staying on if the player taken off is considered unable to return.

Asked whether he was hopeful of his favoured proposal being piloted next season, Gouttebarge told the PA news agency: “There was no consensus to do so within the expert group. There was a little bit of reluctance to move towards a temporary substitution.

“I’m a little bit pessimistic that we are not going to have a clear decision very soon which can change the laws of the game and provide medical teams with sufficient time to assess players with potential concussion.”

Gouttebarge said other members of the panel were concerned the temporary substitutions could be misused or abused by players and coaches, but he insisted it was impossible and “ridiculous” that a player would fake a concussion to gain an advantage.

“These kinds of thoughts were disclosed – to fake an injury is difficult, to fake a concussion is not only difficult, it’s a ridiculous assumption that people make,” he said.

“We all know players dive in order to get a penalty, but faking a concussion? No. I think it’s another level and another dimension.

“If you are afraid of that, IFAB might be empowered to have a pilot scheme in a particular country, and then you evaluate in that country whether a coach/player misused this particular rule or not. But just to base an important decision concerning the health of a player only on an assumption like that, I feel it’s ridiculous.

“Health and safety should be priority number one. Three minutes (to assess a player) is not enough.

“We are on the move with the concussion dossier, but we are not moving very fast. We are very conservative in football, and I would say in comparison to other contact sports where concussion is an issue, we make a fool of ourselves when it comes to our concussion approach again and again.”

Gouttebarge confirmed two options were looked at by the group – the temporary substitution and a draft proposal from the Premier League to bring in an additional concussion substitute if, following a three-minute assessment or at some later point after that, a player was suspected of having a concussion.

“The only change with the Premier League proposal, which is a good change, is that if a player is substituted because of a concussion, it does not count as one of the three normal substitutes,” he said.

“But our main problem is with the recognition of concussion – the Premier League proposal is the same in that respect as it is right now – the medical team gets three minutes and poor decisions get made.”

Gouttebarge said another question raised at the expert group meeting concerning the temporary substitution model was whether that temporary player would take on any yellow card shown to the player being assessed, or start with a clean slate.

The question of fairness was also raised, and it was asked whether both teams should be able to introduce temporary fresh legs if they so wished while a suspected concussion was being assessed.

World governing body FIFA did not wish to comment on Gouttebarge’s remarks, and the IFAB was not immediately available for comment.

The meeting is also due to look at VAR, particularly in terms of how the review and decision-making process is communicated to those watching in the stadium. Feedback on laws introduced for the 2019-20 season will be offered and invited, and minor clarifications to existing laws for 2020-21 are set to be rubber-stamped.