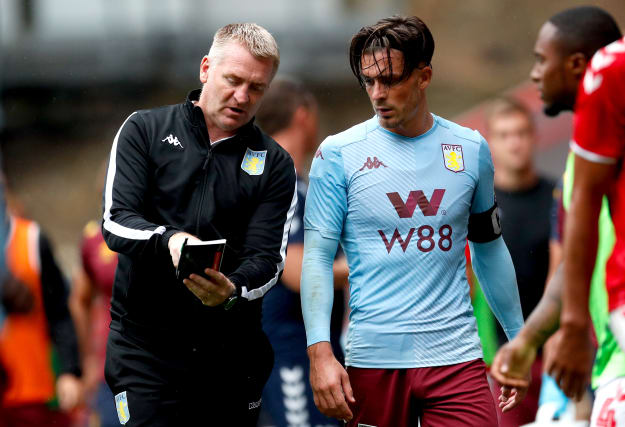 Exactly one year on from being named as skipper for the first time, Grealish will lead out a team he has supported since he was a boy in Villa’s first major domestic final for a decade on Sunday when they take on Manchester City at Wembley in the Carabao Cup.

Following an outstanding season, despite Villa’s battle against relegation, Grealish will also have an opportunity to again impress England manager Gareth Southgate, and on the biggest stage.

With friendlies at the end of March against Italy and Denmark as part of England’s preparations for this summer’s European Championship, Smith feels Grealish is deserving of his chance after watching him mature over the past 12 months since being handed the captain’s armband.

Asked whether he had noticed much change in Grealish, as a player and a person since being named as skipper, Smith said: “As a player yes, as a person, no.

“I can only be honest, and from the moment I came in – and you hear the stories about a person, about a player – what I’ve experienced is a player who wants to accept responsibility as a group leader.

“I am sure he is going to get capped for England this season. His performances are meriting it – and I am not trying to force Gareth Southgate into anything – but the quality is there for all the see, and the maturity from him as well has been excellent.”

Smith claims naming Grealish as captain was “one of my easiest decisions”.

He added: “I’d worked with him for five months, and although he’d been injured for three months, I knew what the club meant to him, I knew what being captain would mean to him.

“So it wasn’t that hard a decision. You look at the team at that time and we had four loan players here as well. For me, he was the natural one to lead the team, and what a year he’s had.

“He has a lot of respect in that dressing room. He has earned that as well as he is never shy to express himself.”

Smith, though, has revealed for the first time he may not be able to hold onto Grealish this summer.

Asked whether victory over City would make it easier to keep him, Smith replied: “I don’t know. That’s a question we’ll have to answer in the summer.

“Obviously, staying in this league is one of the biggest things to help us keep Jack Grealish. He wants to play at the highest level and he wants to win trophies.

“Jack’s future, like the rest of the players, is down to what happens over the next three months. What we can do is assess it then.”