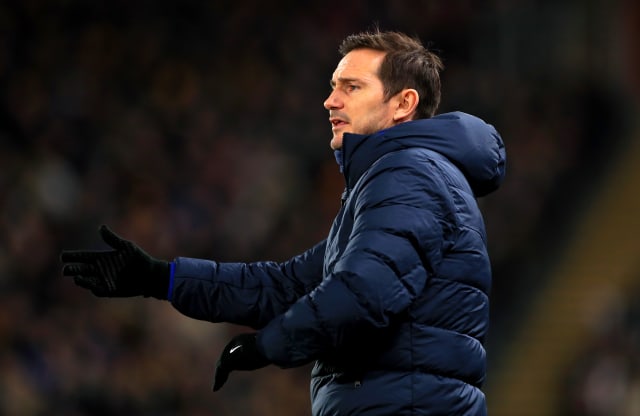 Chelsea manager Lampard believes the top-flight landscape has changed, with Manchester City and Liverpool muscling into the centre of that picture.

The Stamford Bridge boss insists owner Roman Abramovich and director Marina Granovskaia share his views on the Blues’ route back to the top.

Lampard will send his Blues troops into battle at Bournemouth on Saturday reminding the west Londoners that the scrap for fourth place and Champions League qualification could go down to the wire.

And the former England midfielder will do so confident his club bosses accept that assessment.

“I think the landscape of the Premier League has changed,” said Lampard.

“Manchester City and Liverpool have set incredible standards in the league, and also we had some outside influences with the (transfer) ban and with circumstance, a huge player (Eden Hazard) left the club. Those things are there.

“We are certainly on the same page here when I speak with the board and we have all our conversations, there is no doubt we know we are fighting for fourth place.”

Lampard claimed three league titles in Chelsea’s midfield, but believes the task of securing any more from the dugout could require some lengthy labours.

“It is a very dated phrase, when people say ‘you are Chelsea, there is no way you should be happy with fourth’; no, the Premier League has changed,” said Lampard.

“It is not like it was for Manchester United players 15 or 20 years ago, or Chelsea players when we were first or second for a period in the mid-2000s.

“It’s not like that any more and that is the reality. But what we must do is make the fans proud every time we play, show we are fighting to get better and better and better, try and win as many games as we can.

“I don’t think anyone can deny that we have done that this year. At times we have fallen short for little reasons, in terms of those standards.

“We do want to climb and bridge the gap and I strongly believe we will. But I am very aware of what that is. The players need to be aware of it and we are as a club.

“We have to be real, we have to be honest. We can’t pull the wool over our own eyes and think all of a sudden we have a divine right at this level to go up against Bayern Munich and beat them, and move onto the quarters and beat them.

“No, there is a reason why we are where we are at the moment. We have not challenged in the Premier League for a couple of years. We want to close that gap.

“We have to fight and work as hard as we can on the training pitch and in games to close that gap. Come the summer, of course as a club we want to move forward and make some decisions.

“But the gap is there. And Tuesday showed that a bit. But that should not dishearten us; it’s where we are at. Now it’s how we finish the season.”

Willian has revealed a snag in his contract talks, the Brazil forward claiming he wants a three-year deal with Chelsea offering two.

But Lampard is refusing to give up hope on keeping the 31-year-old at Stamford Bridge.

“I don’t want to get too drawn into it because I am the manager of the team and don’t want to look too far down towards the summer.

“We are working day to day to finish the job this season and we are not jumping ahead to the summer. But Willy’s one is an ongoing situation. It’s not over. We’ll see.”