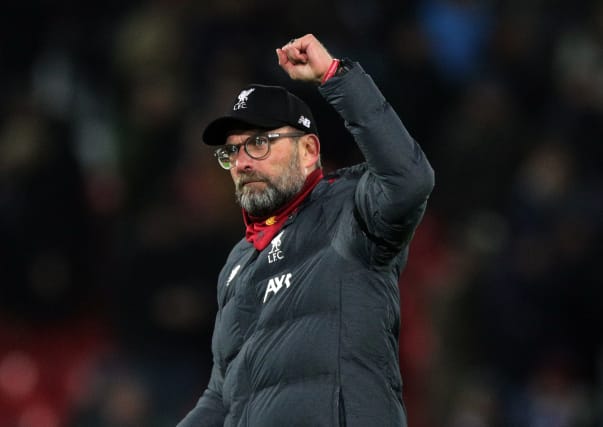 Champions-elect Liverpool have a chance to extend their lead over second-placed Manchester City to a huge 25 points in the Premier League with victory at Watford on Saturday.

The Reds only need four wins from their last 11 league fixtures to claim their first league title since 1990, having won 26 of their 27 games so far.

Runaway leaders Liverpool were made to work hard on Monday night to eventually overcome a stubborn West Ham side and claim a 3-2 triumph at Anfield. The victory saw Liverpool match the points tally registered by Manchester United during their treble-winning season in 1999 and also record the same amount of wins as Arsenal did during their ‘Invincibles’ campaign in 2004 – with 11 games still remaining. Jurgen Klopp’s side also secured their 21st successive home win with three points and equalled Manchester City’s Premier League record of 18 consecutive league victories in the process. A trip to second-from-bottom Watford awaits Liverpool on Saturday evening, where they will look to set another landmark success at Vicarage Road.

Norwich sit seven points from safety with 11 matches remaining and kick off this weekend’s fixtures by hosting high-flying Leicester on Friday evening. James Maddison returns to Carrow Road for the first time since moving to Leicester in June 2018, which could worsen their survival hopes should the Foxes prevail. Norwich need to target victory to give themselves any chance of Premier League survival, with a daunting set of fixtures still come as they travel to Arsenal, Chelsea and Manchester City in three of their final four away games. However, it seems an immediate return to the Sky Bet Championship is inevitable for Daniel Farke’s team.

David Moyes’ second tenure at West Ham started with a bang as they recorded successive victories against Bournemouth and Gillingham, but it has been a struggle ever since. They have picked up only two points from a possible 21 in the Premier League thanks to home draws against Everton and West Ham, with Hammers fans venting their anger at the board as the team slipped in the bottom three. There is some positivity for the London club following a confident display at Liverpool on Monday, however, they face a Southampton outfit who had won four successive away games before their own Anfield mauling last time out.

Can Chelsea bounce back?

Frank Lampard’s side were thoroughly outplayed during their 3-0 first-leg defeat at home to Bayern Munich on Tuesday and he will need to pick up his players following the masterclass by the Bavarian outfit. Chelsea return to domestic football by travelling to a Bournemouth team who are in a battle for safety, sitting just two points above the relegation zone. The Blues have failed to win any of their last three away games in the Premier League but have been stronger on the road than at Stamford Bridge this season, while Eddie Howe’s side have won their last two at the Vitality Stadium. It will be an intriguing clash, especially after Bournemouth completed the double over Chelsea last season and it is hard to call who will come out on top on the south coast.

Chelsea boosted their top-four chances when they beat Tottenham 2-1 at Stamford Bridge last week to open up a three-point gap to fifth-placed Manchester United. However, only five points separate the Red Devils and 11th-placed Everton as the battle for the Europa League spots intensifies. On Sunday, United travel to Everton, who defeated them 4-0 in this fixture last season, while Spurs host Wolves – with the two teams sitting sixth and eighth respectively. Sheffield United and Arsenal are not in action due to Aston Villa and Manchester City’s involvement in the Carabao Cup final, while in-form Burnley could jump up to eighth place with victory at Newcastle on Saturday.