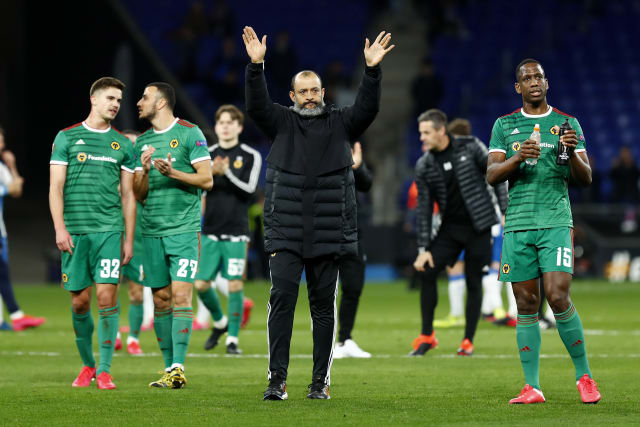 Wolves boss Nuno Espirito Santo admits he is powerless to stop rising expectation levels after his side reached the last 16 of the Europa League.

Adama Traore and Matt Doherty netted for the visitors in Barcelona.

Wolves are also two points off fifth in the Premier League and, after reaching the latter stages of the Europa League, Nuno conceded there is little he can do to keep his side out of the spotlight.

He said: “It’s impossible, my job is this squad. How can I manage outside expectations?

“We are on the journey, we focus on our daily process, tomorrow we will train, Saturday we’re going to train and then we will travel to play Tottenham (on Sunday).

“It’s massive for the club and city, we are happy. We want to keep going. This gel between players is amazing.

“You can only evaluate and dedicate some time (to the achievement) when you’ve finished. We are on the journey. When you are on that you have to focus on a daily basis and keep on going.

Despite defeat Wolves never looked in danger of losing their first-leg advantage after last week’s 4-0 win at Molineux.

Calleri opened the scoring after 16 minutes but Barcelona-born Traore levelled soon after.

Doherty levelled from close range after 79 minutes and, after Pedro Neto missed an open goal, Calleri completed his hat-trick in injury time.

Nuno added: “We should have done better but the hard work was there and we made something which is massive for us. It was a lot of hard work last season so we are proud of what we have been doing.”

Espanyol, bottom of LaLiga, host Atletico Madrid on Sunday in their battle against the drop and boss Abelardo Fernandez hopes victory can aid their survival fight.

“The best way to prepare for a game is a victory but we need to be sounder in defence,” he said.

“It’s good mentally for us, when you play again in three days knowing you won the last one it’s great for you.

“It’s a different competition and rivals but hopefully this victory will be good for us.

“The second half was OK, it was foolish play on our side for their second goal but I think the fans enjoyed it.”