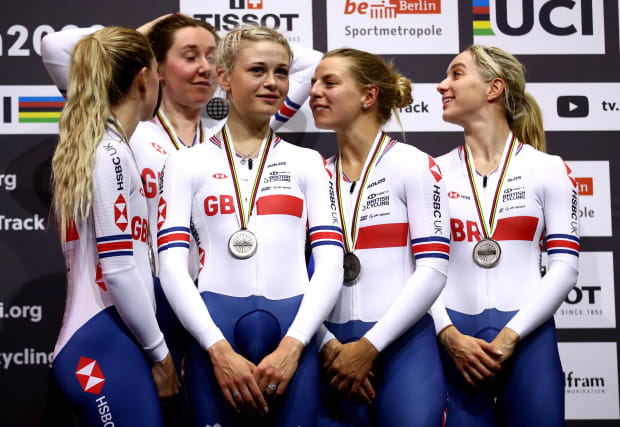 Great Britain had to settle for silver in the women’s team pursuit at the UCI Track Cycling World Championships as Chloe Dygert powered the United States to gold in Berlin.

There was the welcome if unexpected sight of Laura Kenny riding in the first round in the afternoon just a month after breaking a shoulder, but no form of the British line-up had an answer to the Americans, who were fastest in every round of the competition.

The silver was the only medal of the second day for Britain, but it will still go down as a success after Katy Marchant and Sophie Capewell did enough to secure a place in the women’s individual sprint events at Tokyo 2020 – one of the major pieces of outstanding business this week.

Kenny had sat out Wednesday’s qualifying round of the team pursuit, having said she was not comfortable doing standing starts, but clearly boosted by her fourth place in the evening’s scratch race she replaced Neah Evans in the first round on Thursday afternoon.

The four-time Olympic champion helped Katie Archibald, Elinor Barker and Ellie Dickinson dispatch Canada before Evans returned for the final, but they could not match another dominant ride from the Americans, who won in a time of four minutes 11.235 seconds, almost two seconds faster than the Brits.

The two teams were head and shoulders above the rest throughout the competition, with their respective rides in qualifying the second and third fastest ever.

“Qualifying was really positive,” Barker said. “It was definitely the highlight for us and the happiest I’ve felt about the team pursuit in a long time.

“It would have been nicer to go slightly faster. It hurts a little bit at the moment but it’s helpful that it gives us something to push for.”

Earlier, Britain ticked off a major goal of the week as Marchant and Capewell did enough to secure one place in the women’s individual sprint events in Tokyo.

Marchant made the last 16 and Capewell the last 32 of the individual sprint after setting personal bests in qualifying, but those rides propelled them far enough up the rankings to book a ticket to Japan.

“It’s a massive achievement in quite a high pressure environment,” said Marchant, who won individual sprint bronze in Rio four years ago. “I don’t think I’ve ever felt pressure like I have today on myself.

“As an individual performance I wanted to get a top eight so I’m a little bit disappointed but we’ve managed to do that so I can’t be too disappointed.”

There is still the opportunity to secure a second place via the keirin on Sunday.

In the men’s keirin, Jack Carlin was left frustrated after being forced to settle for fourth place, while Jason Kenny missed out on the final and finished eighth overall.

Carlin was limping after taking a knock to the ankle in the semi-final but said he did not expect the issue to bother him in Saturday’s individual sprint.

There was also frustration for Matt Walls in the men’s scratch race as he took Britain’s third fourth place of the competition so far.

While the women’s team pursuit squad celebrated silver, the men’s hopes for Tokyo took yet another blow.

After they failed to make the medal races on Wednesday, they saw Denmark break the world record for a third time in two days to take gold and lay down a huge marker ahead of Tokyo.

The quartet of Lasse Hansen, Julius Johansen, Frederik Madsen and Rasmus Pedersen took one and a half seconds out of their own record with a stunning time of three minutes 44.672 seconds, more than five seconds faster than GB have ever gone.

Denmark have brought on board former Great Britain rider and aerodynamics expert Dan Bigham, who is also hoping to break the world record himself with his Huub-WattBike trade team later this year. He has now helped make his own challenge harder.

“I thought we’d break the world record but I didn’t think we’d break it by that much,” Bigham said.

“I was hopeful we wouldn’t break it by that much as we’re going to try to break it up in Bolivia in eight weeks time.”