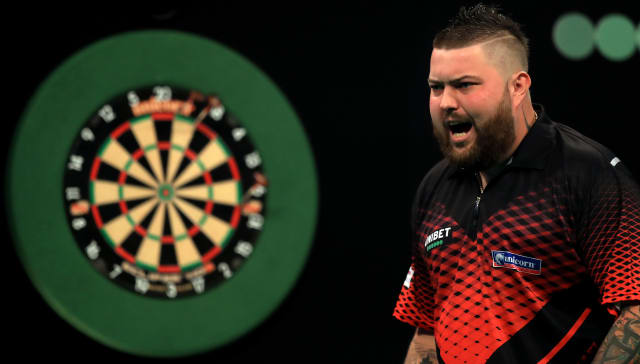 Michael Smith threw the first Premier League nine-darter for three years during his 7-5 win over Daryl Gurney in Dublin.

Smith sent the crowd into a frenzy when checking out with double 12 in the fourth leg, leading to a handshake and a hug from Northern Irishman Gurney.

It was only the ninth perfect leg in what is the 16th Premier League season.

The raucous scenes for Smith’s nine-dart feat only just overshadowed those for the entrance of local hero William O’Connor, making his Premier League debut as one of the ‘challengers’ in this year’s event.

O’Connor, who took the Republic of Ireland to their first World Cup of Darts final in 2019, helped whip the sell-out 9,000 crowd into a frenzy as he orchestrated them in singing his walk-on song, ‘Zombie’ by The Cranberries.

There was no fairytale ending for O’Connor, though, as he suffered a 7-4 loss to world number one and five-time Premier League champion Michael Van Gerwen.

O’Connor trailed 2-0 and 3-1 early on, but had the crowd on their feet when he drew level at 3-3, only for Van Gerwen’s class to prove the difference and see him over the line to regain the lead at the top of the standings.

Earlier in the evening, Nathan Aspinall had briefly jumped to the summit following his 7-5 victory over previously unbeaten leader Glen Durrant.

In the battle of the Premier League newcomers, Durrant looked on course for the win after taking a 3-1 lead, that included a superb 144 checkout in the third leg.

But seven missed darts at a double in the fifth leg that would have given him a 4-1 advantage proved crucial as a to-and-fro battle then ensued before Aspinall captured the last two legs.

In a clash of two former world champions, Gary Anderson enjoyed a 7-5 success over Rob Cross.

The duo could not be separated over the first eight legs, with Anderson, in particular, scoring 109 and 106 checkouts in the sixth and eighth to haul himself level on both occasions.

The latter proved the catalyst for a three-leg burst that propelled him into a 6-4 lead before ultimately prevailing and handing Cross a second successive defeat.

Reigning world champion Peter Wright suffered an embarrassing 7-1 defeat to Gerwyn Price, as the Welshman finally won his first game of the tournament.

Despite endearing himself to the Irish crowd by sporting a spiky green hairstyle, green shirt and trousers, Wright failed to get going.

After sharing the first two legs, Price then reeled off six in a row to end his run of three successive draws, and become the only undefeated player in this year’s tournament.