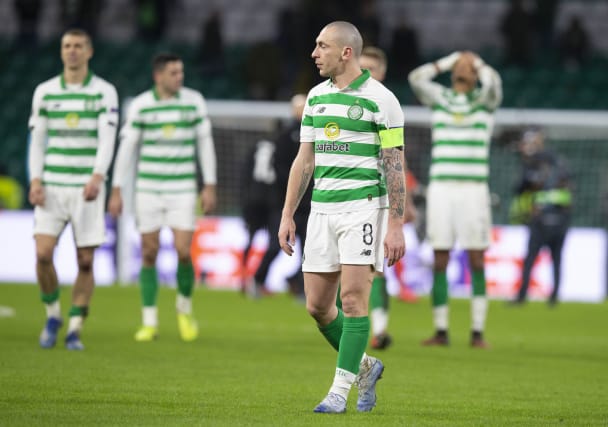 Sloppy Celtic conceded two late goals to exit the Europa League at the hands of FC Copenhagen, the Hoops crashing out 4-2 on aggregate.

The last-32 tie was finely balanced at 1-1 following last week's first leg at the Parken stadium and Neil Lennon's side passed up several chances in a goalless first half in the second leg before helping the Danish side take the lead.

Michael Santos, a late first-half substitute for Mikkel Kaufmann, took advantage of a bad mistake in the 51st minute by Hoops defender Jozo Simunovic to fire the visitors ahead.

Celtic striker Odsonne Edouard scored a VAR-awarded penalty to level in the 82nd minute and, at 2-2, extra-time beckoned. However, three minutes later midfielder Pep Biel restored the visitors' lead before striker Dame N'Doye, who scored last week, added a third in the 87th minute to seal a 3-1 win on the night and send FC Copenhagen through to the last 16.

It was Celtic's first loss of 2020 and it was a defeat that looked so unlikely in the first half last week when they dominated.

Celtic have no chance now of facing Old Firm rivals Rangers, who sealed their place in Friday's last-16 draw in Nyon with victory over Braga on Wednesday night.

The Light Blues' 4-2 aggregate triumph over the Portuguese side added extra spice to Celtic's match which saw the return of skipper Scott Brown and winger James Forrest from injury, with Mohamed Elyounoussi taking over from suspended Ryan Christie.

The visitors looked more sprightly than they had at the start of last week's game. However, in the 22nd minute Elyounoussi began a swift attack down the left which ended with him flashing a drive over the bar from 14 yards when he should have hit the target.

In the 31st minute, following an overlapping cross from Hoops left-back Greg Taylor, FC Copenhagen goalkeeper Karl-Johan Johnsson tipped a header from Tom Rogic onto the post and behind, although the Australian midfielder knew little about it as the ball came off him from Victor Nelsson's clearance.

A mistake by Johnsson just before the break in failing to keep the ball in on the byeline allowed Elyounoussi to hook the ball across an open goal with no takers, but the visiting keeper soon made amends when he saved Edouard's close-range header.

Celtic began the second half with purpose and from a cleared corner Callum McGregor volleyed into the net from the edge of the box, but Portuguese referee Artur Dias had blown for a foul on Johnsson.

Moments later, FC Copenhagen were ahead. Simunovic was woefully short with a back pass to keeper Fraser Forster, allowing Santos to step in and when his cross was blocked by defender Christopher Jullien, the Uruguay international lifted the loose ball high into the net from eight yards before running to take the acclaim of the 1,800 or so away fans.

Johnsson smothered a drive from Rogic in the 69th minute before Leigh Griffiths replaced Elyounoussi to join Edouard in attack. Within seconds, amid a goalmouth scramble, the FC Copenhagen keeper had made a remarkable save while lying in the six-yard box from Griffiths.

The Parkhead men kept pushing but the visitors looked a threat on the occasional counter, Santos driving wide from the edge of the box in the 77th minute.

Three minutes later, referee Dias went to his monitor before deciding Ragnar Sigurdsson had handled Edouard's cross into the box and, after a nervy few moments for the hosts, he pointed to the spot, with the French striker confidently converted.

However, just when it looked like the tie was going Celtic's way, it turned back to FC Copenhagen.

A swift break ended when Biel slipped the ball through the legs of Forster to make it 2-1, and Parkhead was stunned again when Senegalese striker N'Doye broke through to add a third from close range.