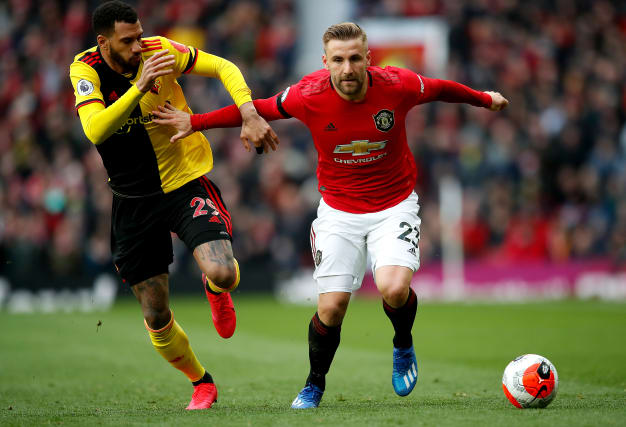 Luke Shaw’s determination to help Manchester United get back to fighting for trophies on a regular basis is matched by the defender’s desire to play in a final after missing the last four.

Having endured a topsy-turvy time since leaving Southampton in 2014, the 24-year-old is looking sharp for Ole Gunnar Solskjaer’s side as they look to end the season on a high.

United are pushing for Champions League qualification, and remain in the hunt for FA Cup and Europa League glory – competitions that Shaw has seen his team-mates win from the sidelines.

Injuries kept him out of the 2016 FA Cup final triumph as well as the following year’s Europa League win, while Jose Mourinho overlooked the full-back for the 2017 EFL Cup final victory and 2018 FA Cup final defeat.

“It is a massive ambition for me,” Shaw said ahead of Thursday’s Europa League last-32 second leg against Club Brugge.

“Obviously I was there for the Europa League final and around it. The feeling, even though I wasn’t on the pitch, in the dressing room after was a feeling I’ve not felt and wanted more of.

“Look, we’re going to keep fighting. We are very confident at the moment and very focused on the job we have tomorrow, so we need to go into this game full of confidence, which I think the boys are.

“We need to get a result. They’re a great team but of course we want to get as far as possible in this competition.”

United head into Thursday’s second leg with the upper hand after Anthony Martial’s away goal in Belgium sealed a 1-1 draw last week.

The Frenchman, much like Shaw, has been unshackled by Solskjaer, having found himself marginalised by divisive former United boss Mourinho.

Asked how the current United manager’s approach to players behind the scenes and in front of the media compares to previous managers, Shaw said: “Obviously I think especially man management-wise he has been unbelievable for not just me but the whole squad.

“He has brought a smile on everyone’s faces and I think you see that every day. He has been brilliant and the lads are all really enjoying it.

“I think even more so now we are getting better results and the team are coming back. We’ve got a lot of players back.

“We have got an important second half of the season. Like I said, Ole has been great and we’re all enjoying working under him and we need to keep giving him the results.”

Solskjaer was full of praise for Shaw in the press conference previewing Thursday’s encounter against Club Brugge, when the subject of criticism was broached with a player that gets his fair share.

“I’ve had a lot (of stick),” the left-back said with a laugh. “To be fair, if you’re coming to Manchester United you need to be able to take that because we’re at the biggest club in the world.

“People are always going to look to criticise you and rightly so because of how big this club is and what they’ve sort of seen in the past. There’s only high standards here.