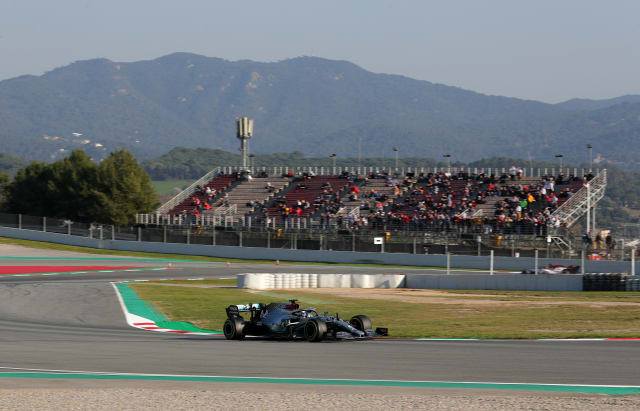 Reigning Formula One champions Mercedes continued to build on their bulletproof reliability in pre-season by amassing the most laps on the opening day of the second test.

It was another resilient outing for Mercedes at Barcelona’s Circuit de Catalunya as Lewis Hamilton and Valtteri Bottas completed the most laps of any of the 10 teams, clocking up 179 between them.

In the morning, six-time champion Hamilton completed 89, with his quickest a one minute 17.562 seconds on the second hardest of the five compounds tyre supplier Pirelli make available to all the teams throughout testing.

Team-mate Bottas, meanwhile, clocked up 90 laps. The Finn’s best of 1min 18.100secs came on the medium rubber. Only Romain Grosjean managed more laps with 107, with the Frenchman spending all day in his Haas.

Kubica, who switched to the team over the winter after being released at the end of a miserable 2019 for Williams, drove the C39 during the morning session.

The Polish driver’s time of 1:16.942 was set on the softest and quickest of the five compounds. He was the only one of the 19 drivers that took to the track on Wednesday whose fastest time was set on that tyre.

Ferrari’s Sebastian Vettel brought out one of three red flags during the day. The session had to be halted due to the amount of gravel the four-time champion kicked onto the track during a spin in his SF1000, with the German still managing 84 laps, 1.2s behind Kubica on medium tyres.

Rookie Nicolas Latifi suffered another engine issue with his Williams, as was the case last week, that resulted in him breaking down during the morning session, leading to a second red flag.

The session was halted one final time a few minutes before the end with Red Bull’s Max Verstappen and Daniil Kvyat in the AlphaTauri both stopping on track, with the former, in particular, spinning and stalling.

Verstappen finished second quickest on the day, 0.4s behind Kubica on the medium compound.