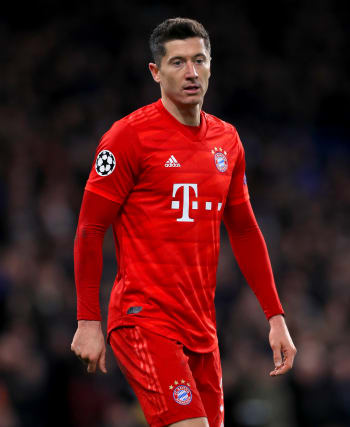 The Poland international, 31, scored against the Blues and set up Serge Gnabry’s goals as Bayern ran out comfortable 3-0 winners in Tuesday’s first leg.

However, tests conducted by club doctor Hans-Wilhelm Muller-Wohlfahrt on Lewandowski following his return from London revealed “a fracture of the tibia at his left knee joint”, a statement on fcbayern.com said.

It continued: “After 10 days of being immobilised in plaster, build-up training will begin. The total downtime will be around four weeks.”

Chelsea visit the Allianz Arena on Tuesday, March 10 and face a daunting task if they are to turn the tie around and reach the quarter-finals, although Lewandowski’s likely absence from the encounter in Munich provides a welcome boost.

Former Borussia Dortmund forward Lewandowski has scored 39 goals across all competitions for Bundesliga leaders Bayern this season, bringing his tally for the Champions League this term to 11 with his effort – assisted by Alphonso Davies – against Frank Lampard’s side on Tuesday night.