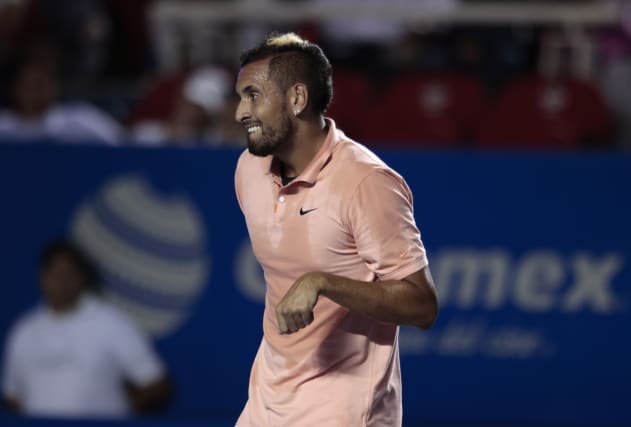 Nick Kyrgios branded the Mexican Open crowd disrespectful after being booed off court in Acapulco.

The Australian was the defending champion but lasted only a set of his first-round match against Ugo Humbert, which he lost 6-3, before retiring with a wrist injury.

In an expletive-laden press conference, Kyrgios said: “I’m not healthy. I tried to come here, I tried to play.

“I’ve been doing media here, and helping out. I tried to play, I tried to give the fans a little bit of tennis. And then they’re disrespectful.”

It was Kyrgios’ first match since his entertaining run at the Australian Open, which saw him lose in the fourth round to Rafael Nadal after getting the public on his side with his efforts to raise money for bush fire relief.

Once again, Kyrgios’ body has proved fragile, with the 24-year-old pulling out of tournaments in New York and Delray Beach before deciding to give it a go in Acapulco.

Kyrgios, who produced one of the best weeks of his career in Mexico last year, said: “My wrist is just not ready to play. I could feel it on every backhand. It’s unfortunate after the memories I had last year. It’s tough for me.”

Top seed Nadal, who lost to Kyrgios in the second round 12 months ago, made light work of Pablo Andujar in a 6-3 6-2 victory, and second seed Alexander Zverev saw off Jason Jung 7-6 (6) 6-1.

In-form Stefanos Tsitsipas saw off Pablo Carreno Busta in straight sets in the first round of the Dubai Duty Free Championships.

The second seed from Greece, fresh from defending his title at the Open 13 Provence in Marseille at the weekend, was taken to a tie-break in the first set.

But Tsitsipas breezed through that and dropped just one more game in a 7-6 (1) 6-1 victory.

Tsitsipas, who has now won 10 consecutive sets, told the ATP website: “I’m not spending extra hours out on the court, which for sure is going to help me.”

The French eighth seed saved saved four match points across the second and third sets before sealing a 2-6 7-5 7-6 (1) victory.

“It was not easy today. I lost five times in a row against Marin. I was not confident before the match,” said Paire.