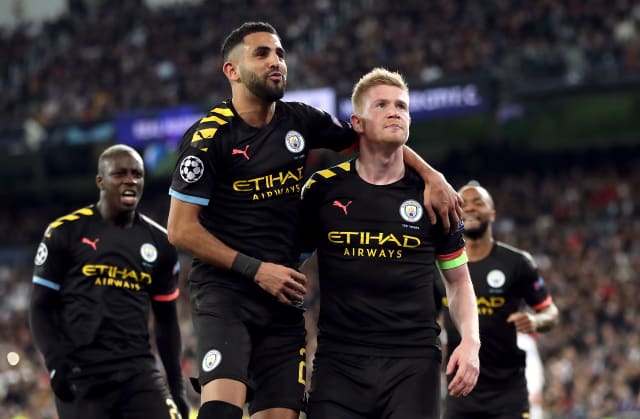 Kevin De Bruyne hailed Manchester City’s character after they fought back from a goal down to beat Real Madrid 2-1 at the Bernabeu and put themselves in pole position to claim a quarter-final spot.

Gabriel Jesus headed the equaliser before De Bruyne struck from the spot as City became the first English side to win in the Bernabeu for 11 years, cancelling out Isco’s opener.

Real captain Sergio Ramos was sent off in the closing stages for bringing down Jesus as the hosts struggled to cope with City’s attacking play.

De Bruyne told BT Sport: “It’s a very good start for the first game. The first 15 minutes we struggled for a bit but you have to go through the storm.

“It was a pretty even first half and we started the second half pretty well. The (Real) goal came at a bit of a bad moment for us because I think we were dominating at the time.

“I thought our response was brilliant. It was a beautiful goal from Gabi and the second goal, the penalty was very important for us.”

Pep Guardiola raised a few eyebrows with his selection as Sergio Aguero and Raheem Sterling were named on the bench.

On the starting line-up, De Bruyne added: “It was a very good start for us (for the tie).

“I think, the four years we’re here with Pep, there are some surprises (within the squad), and even the players, they don’t know before the game starts what they need to do.

“Some (changes) were good. I think we had some lesser moments. In a quality game like this, you’re going to struggle sometimes, but I thought we really fought really well together.”