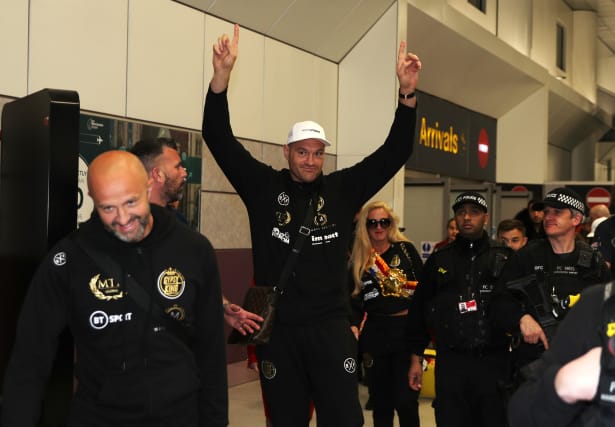 Tyson Fury and Deontay Wider have been urged by Anthony Joshua’s promoter Eddie Hearn to “hurry up” with their third showdown in order to pave the way for an all-British world heavyweight title unification fight.

WBC champion Fury arrived back in the UK on Tuesday morning, just hours after Wilder – who he stopped inside seven rounds in Las Vegas on Saturday night – had indicated that he wants to exercise his rematch clause.

Wilder’s decision is set to put a Fury-Joshua showdown on the backburner, with the latter set to defend his WBA, IBF, WBO and IBO titles against Kubrat Pulev at the Tottenham Hotspur Stadium in June.

“I’m disappointed, but obviously understand it as well,” Joshua’s promoter Hearn told TalkSPORT of Wilder’s decision to take on the ‘Gypsy King’ for a third time.

“He was the champion, he’s lost his belt and wants to win it back.

“I don’t think people want to see the third fight (the first one in December 2018 was a draw). They’ve had 19 rounds now, I think Wilder’s probably won three of them, and in the last fight he didn’t win any and he got battered.

“But I understand the contractual position. He does have a right to a rematch clause and it looks like he’s exercising it.

“I’d just say ‘hurry up please’ and do it quickly.”

Londoner Joshua reclaimed his titles in December when he outpointed Andy Ruiz Jr in Saudi Arabia to avenge his shock defeat to the Mexican six months earlier.

Pulev is 38 and eight years older than Joshua, but the Bulgarian has been beaten only once in 29 fights – by Wladimir Klitschko in 2014.

“We just hope they get on with it and get it out the way,” Hearn said of Fury-Wilder III.

“We can’t get Fury, we’ve got to fight Pulev and we’ll get that out the way.

“Hopefully Fury can get his out of the way and we can get this done in November/December of this year.

“Let’s get these wins, let’s start negotiating, and make sure it’s all in place.

“You’ll get some crazy numbers around the world to host it, but how often are we going to get the chance for two Brits to fight for the undisputed heavyweight world championship?

“To do it at Wembley Stadium would be extremely special.

“We’ve got the chance now to make an undisputed fight between two British heavyweight world champions. We would be daft and mad not to make this happen.”

“The worse-case scenario for Dillian Whyte is he is the mandatory challenge for winner of Fury v Joshua if that fight happens,” Hearn said.

“The bigger issue is if these guys wait or mess around too long then Whyte might have to fight the winner of Fury-Wilder.

“Whyte is going to fight Povetkin in May in the UK – that’s going to be announced this week. Everyone’s got to keep fighting and winning.”