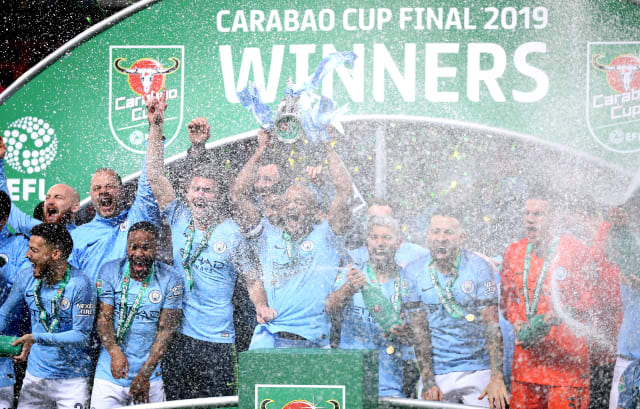 Manchester City will face Aston Villa this Sunday in the Carabao Cup final.

This will be the Citizens’ eighth final, having lifted the cup six times and only falling to defeat once.

Here, the PA news agency looks at the club’s previous record in the final.

City claimed their first league cup title after coming from 1-0 down against West Brom to secure a 2-1 victory in the 102nd minute. Goals from Mike Doyle and Glyn Pardoe secured victory for the Sky Blues.

Four years after their first success City found themselves in the final again against Wolverhampton Wanderers. Colin Bell brought the game level at 1-1 in the 59th minute but Wolves would find the winner through John Richards in the 85th minute.

Two years after the narrow defeat to Wolves, City had another chance at securing League Cup glory. A first-half strike from Peter Barnes and a memorable overhead kick from Dennis Tueart in a 2-1 win against Newcastle United, secured Manchester City’s second League Cup title.

After a wait of 38 years City returned to the final for the fourth time to face Sunderland. Despite an opening goal in the first 10 minutes from the Black Cats, goals from Yaya Toure, Samir Nasri and Jesus Navas secured a third League Cup win for the Citizens.

Man City’s fourth win would be a much tighter affair then their previous successful campaigns. Fernandinho opened the scoring for City but Liverpool equalised in the 89th minute through Philippe Coutinho. After a goalless extra time period, the Blues secured another League Cup victory after a penalty shootout.

City reached the final for the second year running and faced Chelsea as they looked to defend their League Cup title. Although there were no goals in normal time or extra time of the tie, penalties from Ilkay Gundogan, Aguero, Bernardo Silva and Raheem Sterling secured Guardiola’s second league cup victory in as many years.