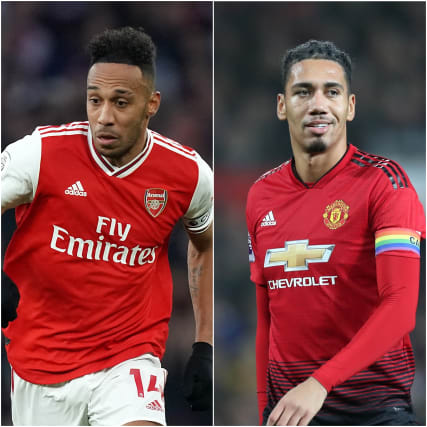 Pierre-Emerick Aubameyang could be on his way out of the Emirates Stadium, according to the Daily Star. The Gabon forward has a deal at Arsenal until 2021, but the Gunners may have to cash in if they fail to agree a new deal.

Chris Smalling may swap the Premier League for Serie A on a full-time basis, reports the Daily Star. Smalling is currently at Roma on a loan move from Manchester United, but the two clubs are reportedly keen on making the switch permanent.

Everton will look to reinforce their defence over the summer with Lille’s Gabriel top of the wishlist, reports the Daily Mirror. The 22-year-old has three caps for Brazil Under-20s.

Leicester are considering offering ChristianFuchs a new contract and the 33-year-old could be keen on extending his time at the King Power, according to the Daily Mail. The former Austria defender is out of contract at the end of the season but Brendan Rodgers may look to keep the veteran at the club into the new campaign.

Meanwhile, Leeds have started preparations should they made it to the Premier League with the club looking to make four summer signings, reports the Daily Express. Jean-Kevin Augustin and Helder Costa, who are currently on loan at Elland Road from RB Leipzig and Wolves respectively, are among the names being linked with the Championship high-flyers.

Jadon Sancho: Liverpool, Chelsea and Manchester United are all keen on the 19-year-old, but Ruhr Nachrichten reports he could remain at Borussia Dortmund into next season.

Timo Werner: The RB Leipzig striker could cost potential suitors like Liverpool less than expected, as he has a release clause of £25million which is half the previously believed sum, reports Sport1.

Nemanja Matic: The midfielder is expected to leave Old Trafford when his contract runs out in the summer but he will not be heading to AC Milan after the 31-year-old’s wage demands proved too high, says Calciomercato.