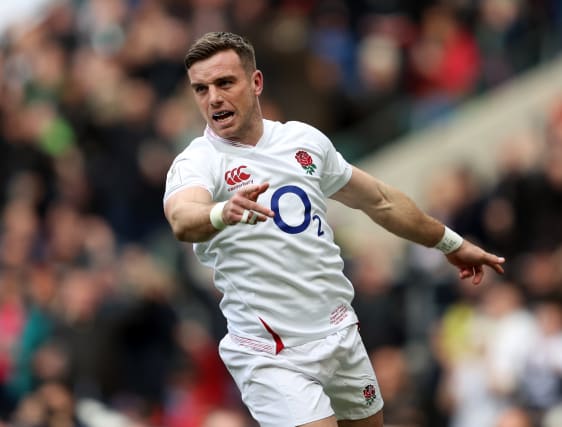 George Ford has warned Wales there is more to come from England following their impressive dismantling of Ireland.

Eddie Jones’ side reinvigorated their Guinness Six Nations title hopes by crushing Irish dreams of a Grand Slam with a resounding 24-12 victory at Twickenham.

The World Cup finalists continue their campaign at home to Wayne Pivac’s Welsh team in just under a fortnight, before completing the championship away to Italy.

Fly-half Ford, who claimed Sunday’s opening try before creating the second for Elliot Daly, insists England have room for further improvement, which could prove ominous for their forthcoming opponents.

“The start of the Six Nations, especially the first half against France, was poor. We got ourselves together for the second half and since then we’ve been building.

“I still think that over these next two weeks we still have the opportunity to build our game even more. We definitely feel like we’re getting better.

“We felt first half (against Ireland) we were pretty constant and relentless in the way we wanted to play and there is still more in us.

“It was a good, strong performance.”

After the disappointing Paris defeat to table-topping France and a narrow win over Scotland, England blew away the previously-unbeaten Irish with a blistering start.

Ford and Daly capitalised on respective sloppy mistakes from Johnny Sexton and Jacob Stockdale to put the hosts in control, before replacement hooker Luke Cowan-Dickie powered over in the second half to put the result beyond doubt.

Owen Farrell also kicked nine points as he emerged with the bragging rights against the team managed by his father, Andy.

The convincing success moved England level on nine points with their opponents, four behind the unbeaten French, with two rounds to go.

While numerous members of Jones’ side could have been singled out for individual praise, Ford felt the unstoppable force of the returning Manu Tuilagi was critical in pushing the hosts over the gainline.

“Manu’s huge in terms of what he brings and the weapon he is,” said Ford.

“He said to me before the game, ‘Give me the ball early and give it to me in a bit of space’. It’s always a good sign when he’s telling you that.

“We want to get the best out of him. You saw the effect he can have on us at first phase and that opens up the game for us. It’s great to have him back.

“Everything is about speed of ball these days so if you win the collision, get quick ruck, they can’t set the defensive line and you have the options to run, pass or kick.

“To have someone who is able to do that from structured play is a huge benefit.”

England’s opening two tries each came from deft kicks in behind.

The 26-year-old Leicester man feels creative kicks, particularly in the opposition 22, are currently in vogue as teams search for innovative ways to break down stubborn defensive units.

“It’s just a pattern in the game at the moment. Every scoring opportunity seems to come from kicks,” he said.

“And not just attacking kicks, but kicks around the middle of the field, getting the ball back in the air and the game completely breaking up.

“More often than not you end up kicking the ball again to score.

“Defences are getting better and covering the field better, so you’ve got to try to break the game up a little bit and kicking is a good way to do that.”