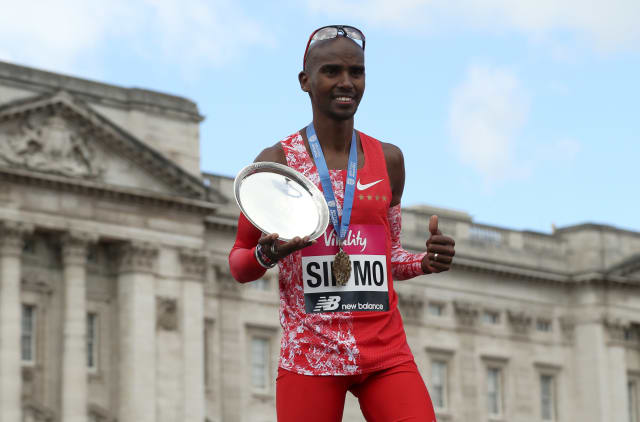 Sir Mo Farah repeatedly denied receiving an injection of a controversial supplement ahead of the 2014 London Marathon when questioned by investigators the following year, before later changing his account.

The revelations are included in a new BBC Panorama documentary which airs on Monday night.

The documentary reveals that Farah, who won the 5,000 metres and 10,000m gold medals at the 2012 and 2016 Olympic Games, was interviewed by investigators from the US Anti-Doping Agency (USADA) in 2015 as part of its probe into his former coach Alberto Salazar and asked whether he had been given L-carnitine before the previous year’s London Marathon.

Farah was tested six days after that race and the BBC reports that, despite listing a number of other products and medicines, he failed to record L-carnitine on his doping control form.

In transcripts obtained by the BBC, Farah denies having been given the injection in the initial 2015 interview with USADA. Panorama reports he then met with UK Athletics’ head of distance running Barry Fudge immediately after the interview and returned to the interview room as the investigators were preparing to leave.

At this point, Farah told them he had been given the injection.

Excerpts from a legal letter from Farah’s lawyers to the BBC, which have been seen by the PA news agency, read: “Mr Farah understood the question one way and as soon as he left the room he asked Mr Fudge and immediately returned… to clarify and it is plain the investigators were comfortable with this explanation.

“It is not against (World Anti-Doping Agency) rules to take L-carnitine as a supplement within the right quantities.

“Mr Farah… is one of the most tested athletes in the UK, if not the world, and has been required to fill in numerous doping forms. He is a human being and not a robot. That is relevant… if in fact something was missed from the form. Interviews are not memory tests.”

Farah finished eighth in the 2014 London Marathon and the fact he had been given L-carnitine was first reported by the Sunday Times three years later.

L-carnitine is a naturally occurring amino acid which some studies suggest could boost athletic performance if it is injected directly into the bloodstream.

L-carnitine is not a prohibited substance under WADA rules. Injections and infusions of it were permitted within WADA rules in 2014 provided the volume was below 50 millilitres every six hours. The permitted volume is now 100ml every 12 hours.

UKA said in a statement: “A small number of British athletes have used L-carnitine and, to our knowledge, all doses and methods of administration have been fully in accordance with WADA protocol. The dosage provided to Mo Farah was well within the 50ml limit permitted.

“Full and honest accounts of the process were given in all forums. Any suggestion to the contrary is false and misleading.”

Salazar, Farah’s former coach at the Nike Oregon Project, was handed a four-year ban by USADA in October last year for doping violations, though he has appealed to the Court of Arbitration for Sport.

In an interview with The Times last week, Farah said he was left stunned by Salazar’s ban, having ended his relationship with the American in 2017.

“For me (when news of the ban emerged) it was like, wow, four years. I was thinking, ‘Oh my God’. I know I never did anything. I know he was my coach. But to put up with this year after year, it’s not you, it’s the coach, but it’s you it is aimed at, is quite frustrating.

“If I had realised there was going to be a problem, I would have been out (sooner). But I was faced with someone who had helped me in my career, to get me where I was, and you have the right to talk to him and look him in the eye.”

Farah has never failed a drugs test and is not accused of any wrongdoing.