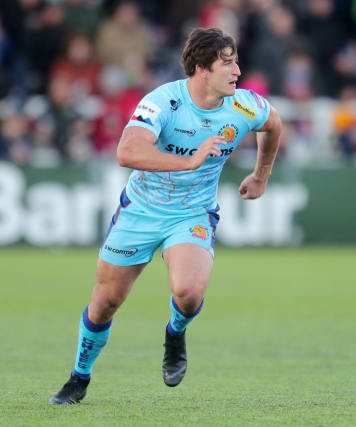 Exeter are flying at the top of the Gallagher Premiership after demolishing third-placed Northampton in an astonishing display at Sandy Park.

Forty points in just 27 minutes either side of half-time saw the pacesetters extend their lead from 3-0 to 43-0. They eventually won 57-7.

Fly-half James Grayson scored a try which he converted himself for Northampton, who would have gone top with a wni.

The start was sedate, with Simmonds’ 10th minute penalty the only score for 32 minutes. Then the floodgates opened.

A high kick from a ruck by scrum-half Nic White put the Saints under pressure and started Exeter’s try-fest when lock Hill jumped over the prostrate opposition and dived over.

Northampton wing Tom Collins was sin-binned for coming into a ruck from the side just 10 metres from his line – and as he put his tracksuit on, Chiefs took a quick tap penalty that hooker Taione touched down. Simmonds added the extras.

The visitors struggled to get any traction in the match, although scrum-half Alex Mitchell was a livewire at the back of the loose situations in the first period.

But Saints conceded yet another penalty, this time underneath their posts, as the clock hit 40 minutes.

Instead of going for the easy three points, skipper Simmonds chose to run it and their ambition was rewarded when lock Kirsten – named man of the match – stretched and touched the ball over the line.  Simmonds’ conversion gave Chiefs a 22-0 lead at the break.

Nine minutes after the restart and Exeter had a try bonus point from a tremendous pass from centre Ian Whitten, making his 150th Premiership appearance, that saw centre Hendrickson cut the Saints midfield to ribbons and roar under the posts for the converted touchdown.

And when prop Moon ran in Exeter’s fifth try in the 57th minute, it was a case of how many the Chiefs would score, as their opponents struggled to keep them out.

For once, Northampton got to the home line and Grayson took advantage of a quick tap penalty to score and convert.

But seconds later, a brilliant turnover inside the Saints 22 let wing O’Flaherty seize the ball and run in from 15 metres to finish off an incredible show.